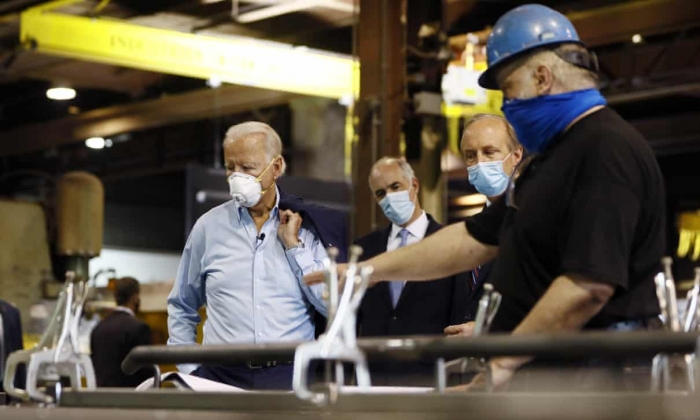 Faced with a disgruntled climate voter during the primary season who wanted him to be tougher on the oil and gas industry, Joe Biden shot him one of his infamous “why don’t you go vote for someone else” responses.

But that was six months ago.

Now, as the presumptive Democratic nominee, Biden’s environmental credentials are on the upswing, and not just because his presidential opponent is a risk to the global climate fight.

Major environmental groups were delighted by Biden’s recent announcement of pledges, unimaginable in US politics just a...

Both Parties Used to Love the Carbon Tax. So Why Are They Giving up on It?
ANALYSIS

It was weeks before the COVID-19 pandemic gripped the country and kept Americans huddled inside. So members of Oregon’s legislature were still showing up for...

A growing toxic threat — made worse by climate change

As the West Burns, The Trump Administration Races to Demolish Environmental Protections
ANALYSIS

AS WILDFIRES DESTROY millions of acres in California, Oregon, and Washington, and an unprecedented series of hurricanes cause historic flooding in the South,...

For more than a decade, Susan Jane Brown has been battling to stop a natural gas pipeline and export terminal from being built in the backcountry of Oregon. As...

A new report from the Bill and Melinda Gates Foundation details the effects of the Covid-19 pandemic on global health progress and lays out expectations for...

Newsom Attempts To Mandate Full Transition to Electric Cars by 2035

California Gov. Gavin Newsom wants to end the sale of all gas-powered vehicles in California by 2035. Apparently, Newsom is attempting to implement his own...

Subscribe today to the Washington Examiner magazine and get Washington Briefing: politics and policy stories that will keep you up to date with what's going on...

The problem of solar panel waste is now becoming evident. As environmental journalist Emily Folk admits in Renewable Energy Magazine, “when talking about...