Democratic Party, Criminal Justice, Violence in America, Portland, Homeland Security
Save for Later
From The Left 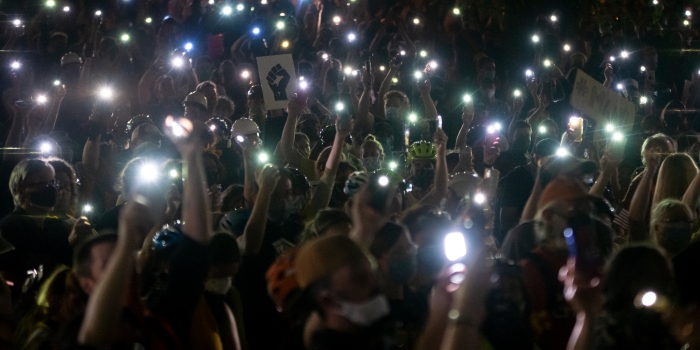 THE ROGUE DEPLOYMENT of secret federal police forces in Portland, Oregon, has added a new complication to negotiations over reauthorizing the Trump administration’s vast surveillance powers and appropriating new money for the Department of Homeland Security. In March, a sweeping set of government authorities to monitor people in the United States expired, and Congress continues to debate what limits should be put on such powers before reauthorizing them. And the House is debating its next DHS funding bill, with the Congressional Progressive Caucus pushing leadership not to bring it up for a vote given Trump’s abuse of power and DHS agents’ role in a Portland arrest.

House Democratic leaders, however, are considering lumping in DHS funding with appropriations for the departments of Labor and Health and Human Services, making it more difficult for progressive Democrats to oppose. Rep. Pramila Jayapal, D-Wash., said that the CPC is urging leadership either to not bring up the bill at all or to break it off from Labor-HHS and allow for a separate vote.

“What you’re seeing is this giant Trump administration machine deputize every arm of government to engage in their agenda at the expense of democracy and the Constitution, so there aren’t traditional boundaries anymore for any of those pieces of legislation,” Jayapal said. “Every argument is about, do you want to give more tools to the Trump administration to destroy our Constitution?”

Read full story
Some content from this outlet may be limited or behind a paywall.
Democratic Party, Criminal Justice, Violence in America, Portland, Homeland Security

News
Republicans and Democrats strike deal on '9/11-style' commission to investigate Jan. 6 attack on US Capitol
The Blaze