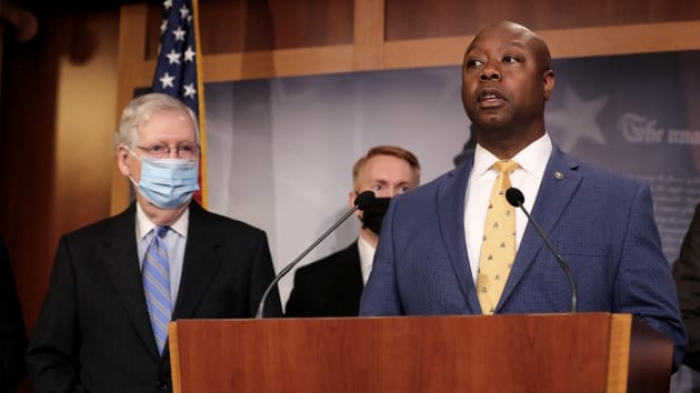 Senate Republicans on Wednesday unveiled their bill to reform the police, the latest effort by lawmakers to overhaul U.S. law enforcement in the face of unrelenting pressure from activists in the wake of George Floyd’s death.

Here’s some of what the Republicans’ bill would do:

Incentivize law enforcement agencies to ban the use of chokeholds by tying funding to whether departments have prohibited the practice “except when deadly force is authorized”;
Ramp up data collection efforts to track when an officer’s use of force results in death or serious...

Go ad-free! Support AllSides.
About these ads
More news about US Senate
https://www.cnbc.com/2020/06/17/senate-republicans-reveal-police-reform-bill-that-breaks-with-democrats-on-key-issues.html

Senate Republicans are having trouble coming to grips with the new coronavirus relief bill outlined by their own party leaders Monday afternoon. Many want...

Wisconsin Sen. Ron Johnson blocked a bipartisan effort to make Juneteenth a federal holiday saying it would cost too much. According to The Huffington Post...

The End of the Filibuster—No, Really
ANALYSIS

Through the mid-20th century, southern segregationists relied on the Senate filibuster as their ultimate legislative weapon to block equal rights for Black...

The Role of the Filibuster

Senate Republicans are conflicted about what to do if a Supreme Court seat becomes vacant during the remainder of President Trump's first term, a possibility...

Both parties say it’s urgent for the federal government to continue propping up businesses and average Americans with a new relief bill. But rifts over the...

Republican lawmakers faced with slipping poll numbers and economic indicators acknowledge they are under pressure to reach a quick deal with Democrats on a new...

A senator for the state of Arkansas is defending comments he made on slavery in the United States. Republican Senator Tom Cotton said US founders viewed...

'I will not be adjourning the Senate': McConnell scraps recess over stalled aid talks

Senate Majority Leader Mitch McConnell announced Thursday the chamber will be back in session Monday and he would not gavel out for the traditional summer...

Witnesses at a recent Senate hearing who testified about antifa's role in stirring aggressive protests and riots in Portland, Oregon, say their call for...

Top Trump administration officials and Democratic congressional leaders will try on Wednesday to narrow their stark differences over a coronavirus aid bill,...

Federal COVID aid will get even more political if the Senate’s senior Democrat gets her way. Sen. Dianne Feinstein, California Democrat, wants to use...

Feinstein: States Without Mask Mandates Should Have COVID-19 Relief Withheld

Senator Dianne Feinstein (D-CA) vowed Thursday to push individual states toward adopting a mask mandate by introducing a legislative amendment in the Senate to...