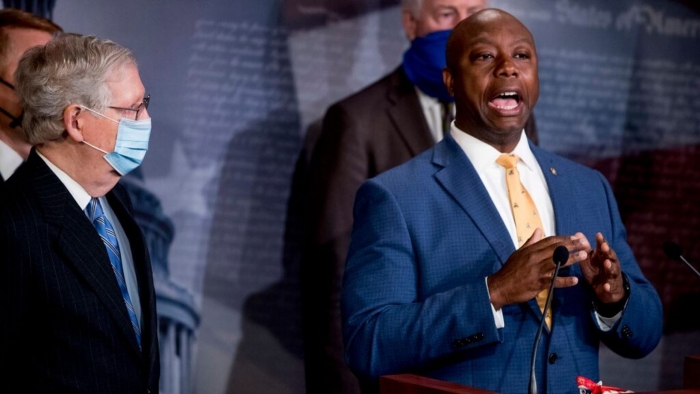 Sen. Tim Scott, the lone African-American GOP senator, spearheaded the legislation in the wake of George Floyd's death and nationwide protests demanding racial justice -- including activists' calls to dismantle police departments. He framed the legislation as a bridge between law enforcement and communities of color.

Go ad-free! Support AllSides.
About these ads
More news about US Senate
https://www.foxnews.com/politics/senate-republicans-release-police-reform-legislation

Lawmakers threatened ahead of impeachment trial

Federal law enforcement officials are examining a number of threats aimed at members of Congress as the second trial of former President Donald Trump nears,...

Democrats can pass a big bill through the Senate without any Republican votes. Here’s how. If President Joe Biden and Democrats in Congress want to get...

Democrats are in control of the Senate. But Sen. Ron Johnson is still leading the Homeland Security Committee, even though he's term-limited and in the...

House Democrats will deliver an impeachment charge against former President Donald Trump to the Senate on Monday, triggering the start of a second trial in the...

How does a 50-50 Senate work? Two leaders who tried it explain.
ANALYSIS

Party leaders in today’s 50-50 Senate are haggling over a power-sharing agreement, and that’s no surprise. Only twice in American history has the Senate had a...

The Democratic-controlled U.S. House of Representatives will deliver an impeachment charge against former President Donald Trump to the Senate on Monday,...

House Democrats plan to walk the impeachment charge against former President Donald Trump to the Senate on Monday evening, but multiple members of the GOP in...

Chief Justice John Roberts will not preside over former President Donald Trump’s impeachment trial in the Senate, according to reports. Senator Patrick...

Sen. Josh Hawley Monday slammed the Democratic senators who filed an ethics complaint against him and Sen. Ted Cruz over their Electoral College objections on...

House Speaker Nancy Pelosi will send a single article of impeachment against Donald Trump to the Senate on Monday, clearing the way for his trial to start next...