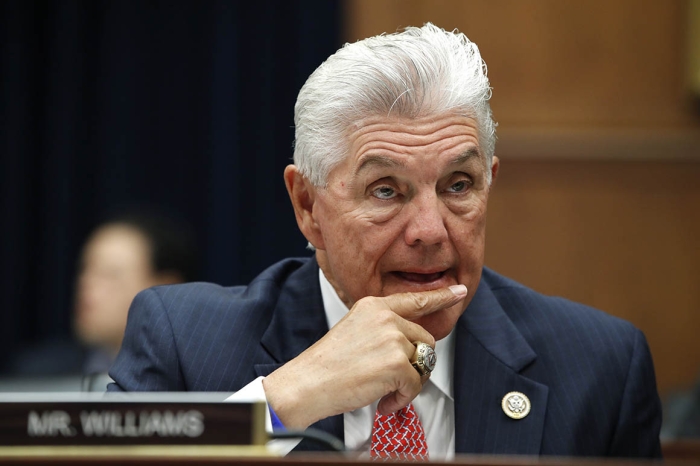 At least four members of Congress have reaped benefits in some way from the half-trillion-dollar small-business loan program they helped create.

And no one knows how many more there could be.

It’s a bipartisan group of lawmakers who have acknowledged close ties to companies that have received loans from the program — businesses that are either run by their families or employ their spouse as a senior executive.

Republicans on the list include Rep. Roger Williams of Texas, a wealthy businessman who owns auto dealerships, body shops and car washes,...

Go ad-free! Support AllSides.
About these ads
More news about US Congress
https://www.politico.com/news/2020/06/16/congress-small-business-loan-320625

Senate Majority Leader Mitch McConnell warned the Trump administration against striking a stimulus deal with House Speaker Nancy Pelosi over fears it would...

Georgia’s Fourteenth Congressional District was created by Republican legislators about a decade ago, after the 2010 census. It’s bordered by Tennessee to the...

Pelosi Says No Action on Airline Aid Without Bigger Stimulus

House Speaker Nancy Pelosi said Thursday there could be no action on a stand-alone bill to aid airlines or any other sector of the economy without an agreement...

WASHINGTON — Amid the constant political chaos of 2020, there have been a few consistencies. One of them has been a growing Democratic advantage in this fall’s...

Republican and Democratic leaders have rejected a comprehensive testing program in the Capitol. President Donald Trump's coronavirus diagnosis exposes the...

The Trump administration and Democrats made progress on coronavirus stimulus talks Tuesday but still need to overcome major differences to reach a deal before...

Why Democratic Senate Candidates Are Competitive In Red States Like Alaska, Kansas And Montana
ANALYSIS

Democrats have a relatively clear path to securing a majority in the U.S. Senate: Win seats in Arizona, Colorado, Maine and North Carolina — all states where...

The White House is preparing a $1.8 trillion coronavirus relief offer, according to people familiar with the discussions, partly closing the gap in...

House Speaker Nancy Pelosi made a dramatic announcement during her weekly press conference Thursday by telling reporters that she intends to discuss a...

House Speaker Nancy Pelosi said she won’t agree to a narrow bill to bail out the struggling airline industry, telling reporters it would have to be part of a...

The coffers of some Republican congressional candidates received a boost from the private equity sector as a major PAC representing the industry’s largest...