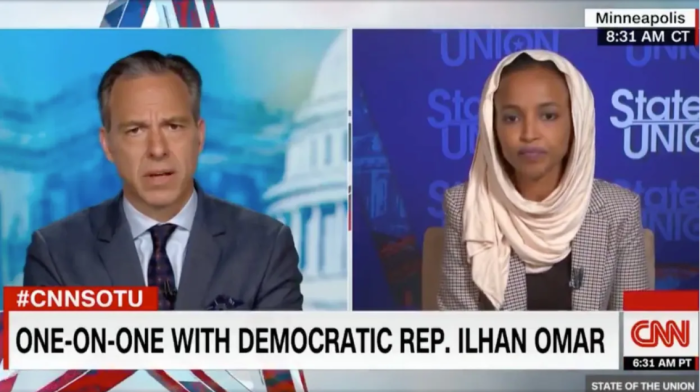 Rep. Ilhan Omar (D-Minn.) could not answer CNN anchor Jake Tapper's question about who will protect the citizens of Minneapolis if the local police force is disbanded.

During Sunday's "State of the Union," Tapper asked Omar about her insistence that police should be defunded and an alternative law enforcement should be put into place.

Omar, who represents a portion of Minneapolis, could not tell Tapper what would happen once the police are disbanded.

Last week, the Minneapolis City Council passed a resolution to replace the local police force with a...

Go ad-free! Support AllSides.
About these ads
More news about US Congress
https://www.theblaze.com/news/ilhan-omar-protect-constituents-police

James wrote to the believers, “Consider it pure joy, my brothers and sisters, whenever you face trials of many kinds, because you know that the testing of your...

Together, You Can Redeem the Soul of Our Nation
OPINION

While my time here has now come to an end, I want you to know that in the last days and hours of my life you inspired me. You filled me with hope about the...

When John Lewis left us, editorials and columns paid tribute to his leadership, his courage, his moral example. The praise was well deserved. A broader context...

The military tactics utilized by Homeland Security officers to control protesters in Portland, Oregon, and other cities are being decried by congressional...

House Majority Leader Steny H. Hoyer is calling for Florida Republican Ted Yoho to be formally reprimanded on the House floor for derogatory words he allegedly...

Rep. John Lewis of Georgia died late Friday at the age of 80. He was a civil rights icon and had served in the House of Representatives since 1987. Before...

The former White House physician under President Donald Trump as well as three other Republicans are likely heading to Congress next year after winning primary...

They say bad facts make bad law. But here is a case of bad law making bad facts. The United States Court of Appeals for the D.C. Circuit, in a rare ruling...

The House on Friday passed a first tranche of 2021 spending bills to fund parts of the federal government past September, with Democrats eager to lay down...