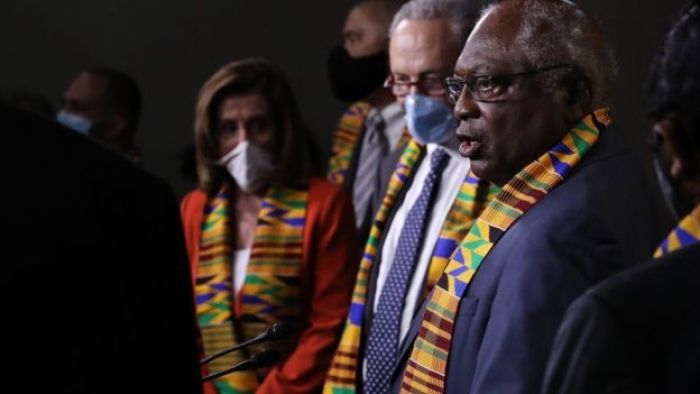 When US Democrats in Congress proposed legislation to reform the police following weeks of protests over the death of African American George Floyd at the hands of a white officer, commenters on social media only wanted to talk about one thing: what they were wearing.

Nancy Pelosi, the Speaker of the House of Representatives, and other Democratic lawmakers were draped in scarves made from a cloth of colourful geometric Ghanaian designs called kente.

It turned out to be quite a controversial sartorial choice.

Why were they wearing it?
The...

When President Donald Trump wanted to stop immigrants coming to the U.S. from "s***hole countries," as he reportedly described them, he imposed a travel ban on...

Nigerian journalist and novelist Adaobi Tricia Nwaubani writes that one of her ancestors sold slaves, but argues that he should not be judged by today's...

U.S. Africa Command acknowledged in a report released Monday that a 2019 military airstrike in Somalia killed two civilians and injured three others. Maj....

President Trump on Friday announced a peace deal that would normalize ties with between Israel and Sudan, claiming there "would be many more peace deals to...

There isn’t much good news in the world these days, but a potential bright spot is Sudan. The U.S. has a chance to pull the northeast African nation closer to...

'We Have no Mercy on You People': Radical Muslims Attack, Injure Young Christian Woman in...

A 21-year-old Christian woman was beaten unconscious by radical Muslims in Isiolo, Kenya last month. Fozia was with her brother and sister when seven...

Microsoft co-founder Bill Gates, through his foundation, has spent billions of dollars on health initiatives in developing countries, and amid the coronavirus...