Bias of The Marshall Project

Why So Many Police Are Handling the Protests Wrong 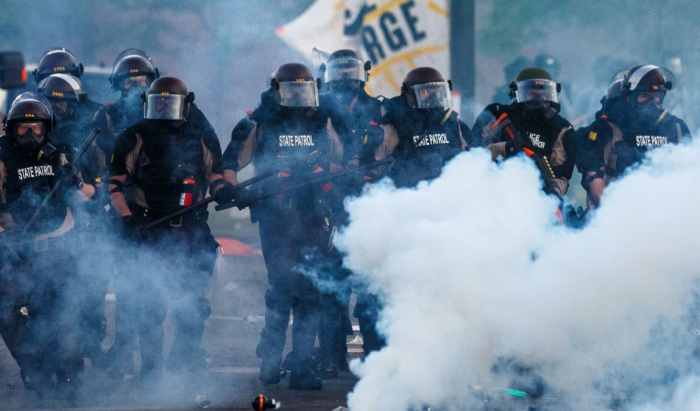 MINNEAPOLIS — Last Wednesday, Marcell Harris was hit by a rubber bullet. He had joined the second day of protests in this city over the killing of George Floyd, a black man who died after a police officer kneeled on his neck for more than eight minutes while bystanders filmed. Though these protests began with peaceful demonstrations outside the city’s 3rd Precinct, interactions between police and protesters had escalated. Police unleashed pepper spray, projectiles and tear gas. Protesters threw water bottles, built barricades and destroyed nearby property.

NEWS
California Will Release Up to 8,000 Prisoners by Summer’s End
Mother Jones

California Will Release Up to 8,000 Prisoners by Summer’s End

Up to 8,000 incarcerated people across California will be released by the end of August in response to the COVID-19 crisis in the state’s prison system, the...

The law and order president has decided that a convicted criminal should not go to prison. It may be mere coincidence that Roger Stone is an old friend and...

Like many cities, New York City began equipping its police officers with body-worn cameras a few years ago. The footage is often invaluable evidence for the...

Editorial: What isn’t working to reduce crime in Chicago — and what could
OPINION

Rules of engagement are never static. They change alongside the changing circumstances of parties enmeshed in conflict. It’s true of countries, of politicians...

US President Donald Trump has commuted the prison sentence of his former adviser Roger Stone. The announcement came just after the Washington DC Court of...

With legislation to address racism and the use of excessive force by law enforcement stalled in Congress, there is broad public support in the United States...

SEATTLE (AP) — The Seattle Police Department has gone to court to gain access to unpublished media images from the May 30 protests as part of an investigation...

President Trump commuted the prison sentence of longtime friend Roger Stone on Friday night, days before Stone was to report to federal prison to serve a...

Sweeping police reform is stalled in Congress: The House passed a bill last week that the Senate appears to have no plans to take up, while Sen. Tim Scott’s...

Protesters say America's criminal justice system is unfair. It is. Courts are so jammed that innocent people plead guilty to avoid waiting years for a...