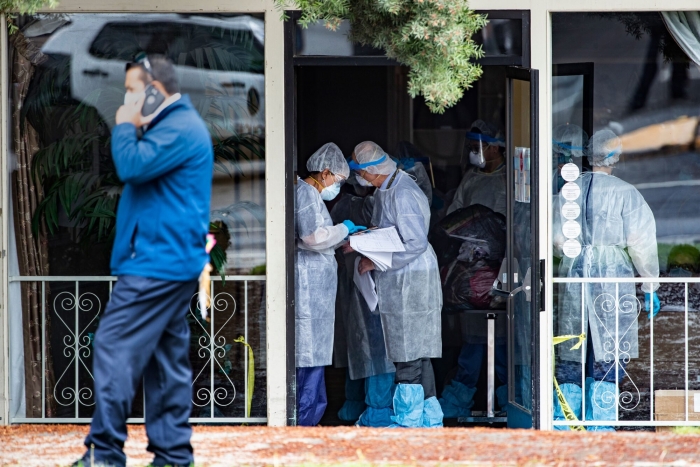 On Dec. 15, 2016, the nation’s largest nursing home lobby wrote a letter to Donald Trump, congratulating the president-elect and urging him to roll back new regulations on the long-term care industry.

One item on the wish list was a recently issued emergency preparedness rule. It required nursing homes to draw up plans for hazards such as an outbreak of a new infectious disease.

A blow-by-blow account of how the president killed thousands of Americans. On July 17, President Donald Trump sat for a Fox News interview at the White...

When Congress expanded unemployment insurance this year to meet the staggering economic toll of the pandemic, it had one less-noticed effect: It made America’s...

WASHINGTON – With stimulus talks with Congress at an impasse, President Donald Trump signed a series of executive orders on Saturday to provide temporary...

Coronavirus Cases Are Surging. The Contact Tracing Workforce Is Not

The country needs as many as 100,000 contact tracers to fight the pandemic, the director of the Centers for Disease Control and Prevention told Congress in...

“After more than a week’s worth of meetings, at least some clarity is emerging in the bipartisan Washington talks on a huge COVID-19 response bill. Negotiators...

Speaking to CNN, Dr Fauci, a member of the White House coronavirus task force, said he had personally received death threats. As a result he said he had...

PHILADELPHIA, Miss. (AP) — When Sharon Taylor died of coronavirus, her family — standing apart, wearing masks — sang her favorite hymns at her graveside, next...

New York governor Andrew Cuomo rejected calls for an independent investigation into deaths of coronavirus patients in state nursing homes, saying such an...

A 7-Year-Old Dies From COVID-19, Youngest Victim of the Virus in Georgia

A seven-year-old boy with no underlying health conditions has died from the coronavirus in Georgia, as President Donald Trump is boasting that children are “...

Wealthy Americans have fled New York City amid the coronavirus pandemic and have likely realized maybe those exorbitant taxes they’re paying in the Big Apple...

Herman Cain, a former 2012 Republican presidential candidate, has died at 74 after contracting the coronavirus and battling the infection for nearly a month,...

Rep. Louie Gohmert (R-Texas) said that it was "most likely" wearing a face mask that led to his positive test for coronavirus. Gohmert made the comments...