The Return of the Tea Party 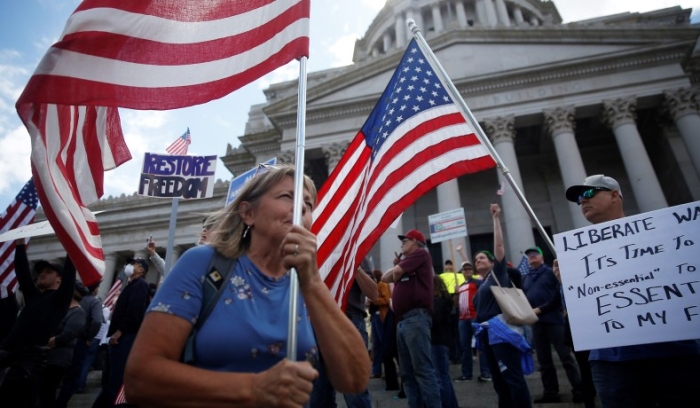 Being told what to do by epidemiologists and officials wielding SCIENCE as their authority has been enough to bring Tea Party–era liberty back in vogue.

That was when spontaneous, grassroots protests against overweening government sprang up and were widely derided in the media as dangerous and wrong-headed.

The protesters then were inveighing against Obamacare; the protesters now are striking out against the coronavirus lockdowns.

The anti-lockdown agitation shows that, despite the revolution in Republican politics wrought by President Donald Trump, opposition to government...

NEWS
California Was a COVID Success. Here’s Why It’s Veering Back to Lockdown.
Daily Beast

California Was a COVID Success. Here’s Why It’s Veering Back to Lockdown.

Weeks before Gov. Gavin Newsom’s announcement Monday that California would dramatically reverse its reopening, a doctor 2,500 miles away saw a new COVID-19...

"The new faster and complete data system is what our nation needs to defeat the coronavirus," Department of Health and Human Services official says. The...

America Should Prepare for a Double Pandemic
ANALYSIS

COVID-19 has steamrolled the country. What happens if another pandemic starts before this one is over? Seven years ago, the White House was bracing itself...

What happens if Covid-19 symptoms don’t go away? Doctors are trying to figure it out.
ANALYSIS

People with long-term Covid-19 complications are meanwhile struggling to get care. In late March, when Covid-19 was first surging, Jake Suett, a doctor of...

In the summer of 1832, a mysterious scourge that had come all the way from Asia loomed over the city of New York, having ravaged London, Paris, and Montreal....

On the afternoon of March 23, Jagath Ekanayake was finishing a cup of tea when his supervisor, James Barringer, told him to clear out. Ekanayake, a scientist,...

The Trump administration has ordered hospitals to bypass the Centers for Disease Control and Prevention and send all COVID-19 patient information to a central...

Moderna's COVID vaccine candidate appears to be safe and provide some immunity, new data from...

CAMBRIDGE, Mass. – A candidate vaccine against COVID-19 developed by the federal government and Moderna, Inc., appears to be safe and to trigger an immune...

In a post-COVID-19 world, the choice to regress, reform, or reset

COVID-19 has transformed our personal lives and brought to a head pressing political, economic, and social questions. Their answers could transform the world,...

California has reimposed restrictions on businesses and public spaces amid a spike of coronavirus infections in America's most populous state. Governor...

Hospitals are now to send all COVID-19 patient information to a Department of Health and Human Services database in Washington, D.C., through a new policy that...

Orange County Board of Ed.: Open Schools, Masks Not Required

The Orange County Board of Education in California has voted for guidelines calling for students to return to schools without social distancing or face masks...

Rate Bias
Coronavirus
Should The WHO Face Consequences Over COVID-19? We Asked Their Health Tech Expert

The World Health Organization has been criticized for spreading China’s misinformation on COVID-19 and we asked one of the organization’s experts if there...

NBC News spent weeks documenting its science contributor’s battle with COVID-19, but now he admits that he never tested positive for it. Dr. Joseph Fair, a...

As coronavirus cases spike across Florida, dozens of hospitals in the state have announced that their intensive-care units are at capacity and many more warn...