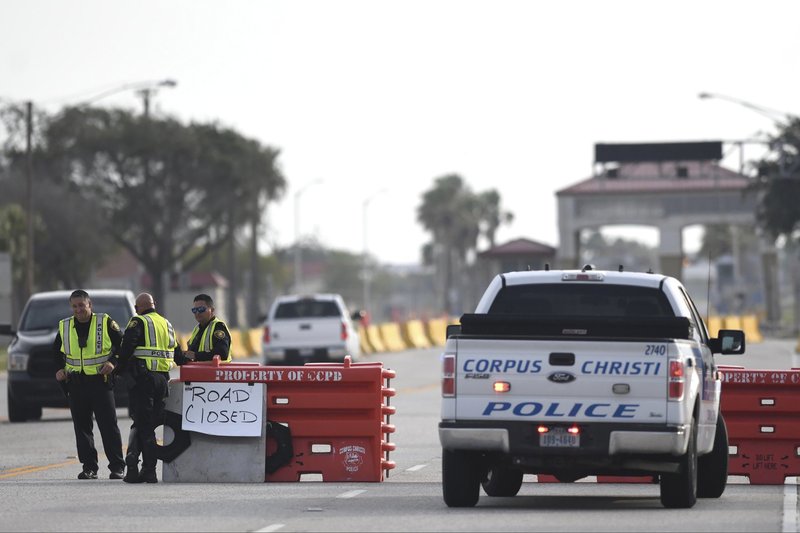 The security team responded to the Naval Air Station-Corpus Christi at about 6:15 a.m. One sailor assigned to the security force team was injured but was in good condition, the Navy said.

The injured Navy sailor was shot but was wearing body armor, said a U.S. official who spoke on condition of anonymity to provide information not yet made public.

All gates remained closed and the...

President Trump gave his first televised statement on the George Floyd protests Monday, emphasizing the need for “law and order” and threatening to send in the...

The murder of George Floyd was a lynching in broad daylight. Three police officers stood and watched as a fourth, Derek Chauvin, knelt on Floyd’s neck. They...

Two autopsies both find George Floyd died by homicide, but differ on some details

George Floyd, the Minnesota man who died after an officer arresting him pressed his knee onto his neck, died by homicide, according to the results of two...

A man was shot dead in Louisville after police officers and the Kentucky National Guard “returned fire” while clearing a large crowd early Monday....

Pockets of the United States descended into chaos Sunday as another day of mass demonstrations over the death of yet another black man in police custody led to...

It began with Attorney General Bill Barr standing with his hands casually in his pockets, not wearing a tie, surveying the scene at Lafayette Park across from...

How can police violence be prevented?

Massive protests in cities across the country in response to the death of George Floyd have once again brought the issue of police brutality into the national...

MINNEAPOLIS – Both the Hennepin County Medical Examiner's office and an autopsy commissioned by George Floyd's family have ruled that the death of Floyd – in...

Protesters staged large-scale demonstrations across the country on Sunday, expressing outrage at the death of George Floyd in Minneapolis and, more broadly,...

President Donald Trump was scheduled to meet with his top law enforcement officer behind closed doors on Monday as cities nationwide awoke from a smoldering...

What is Antifa, the far-left group tied to violent protests?

Antifa, the far-left militant movement that calls itself "antifascist," has no defined organizational hierarchy or membership process. The collection of...

American cities are spending Monday morning digging out from scenes of destruction after demonstrations against the police-involved death of George Floyd gave...

Doing evil in the service of a just cause does not change either side of the moral equation: Evil remains evil, and the just cause remains just — neither...