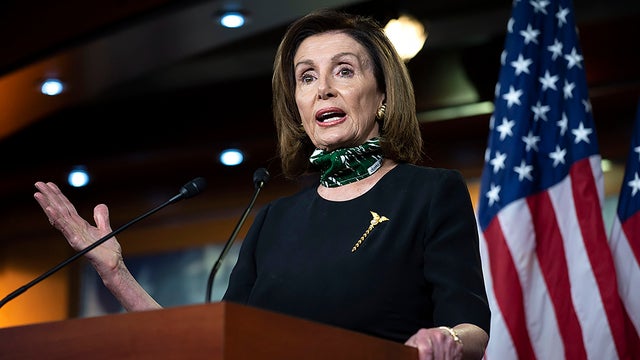 Speaker Nancy Pelosi (D-Calif.) said Monday that it's "not a good idea" for President Trump to be taking hydroxychloroquine as a potential treatment for coronavirus.

"I would rather he not be taking something that has not been approved by the scientists, especially in his age group and in his, shall we say, weight group, what is morbidly obese, they say," Pelosi said during an appearance on CNN's "Anderson Cooper 360."

Trump said earlier in the day that he...

NEWS
Is Trump Implementing COVID Relief Efforts With ‘No Oversight’?
The Dispatch

Go ad-free!   About these ads
More news about Healthcare
https://thehill.com/homenews/house/498435-pelosi-says-that-trump-taking-hydroxychloroquine-is-not-a-good-idea

As Governor Andrew Cuomo faced a spirited challenge in his bid to win New York’s 2018 Democratic primary, his political apparatus got a last-minute boost: a...

Questions about COVID-19 test accuracy raised across the testing spectrum

For Sarah Bowen, it all started with a sore throat. Not the kind of searing pain she’d feel with strep, she said, but a throat irritation that just didn’t feel...

Since the beginning of the coronavirus pandemic, more than 90,000 health care workers have been infected with the virus, and many have died. To name a few,...

‘How Could the CDC Make That Mistake?’
ANALYSIS

The Centers for Disease Control and Prevention is conflating the results of two different types of coronavirus tests, distorting several important metrics and...

Trump administration paying huge premium for mask-cleaning machines. Which don't do the job.

It sounded like a great deal: The White House coronavirus task force would buy a defense company’s new cleaning machines to allow critical protective masks to...

The Centers for Disease Control and Prevention has acknowledged that it is mixing the results of two different kinds of tests in the agency's tally of testing...

When a coronavirus vaccine is ready, who gets it first?

Government and private companies around the world have mobilized in an effort to develop a vaccine for the coronavirus at a record pace. The Trump...

It's not so crazy for Trump to take hydroxychloroquine
OPINION

After weeks of going quiet on hydroxychloroquine (HCQ), the anti-malarial drug he used to tout as a "game-changer" for the coronavirus, President Trump...

During a virtual rally in Wisconsin Wednesday, presumptive Democratic presidential nominee Joe Biden claimed that President Trump was implementing the...

A Fundamental Flub From The CDC
ANALYSIS

After two months lived under the threat of coronavirus, the key characteristic of the crisis remains uncertainty. We don’t know where the virus came from. We...

A new grassroots organization of doctors is telling the nation it needs a second opinion about the way to handle this pandemic medically and mentally....

The Idiotic Fight over Hydroxychloroquine
OPINION

Pandemics call for a willingness to break medicine out of the usual red-tape mentality and accept some risks in combating a fast-moving, deadly virus. In that...