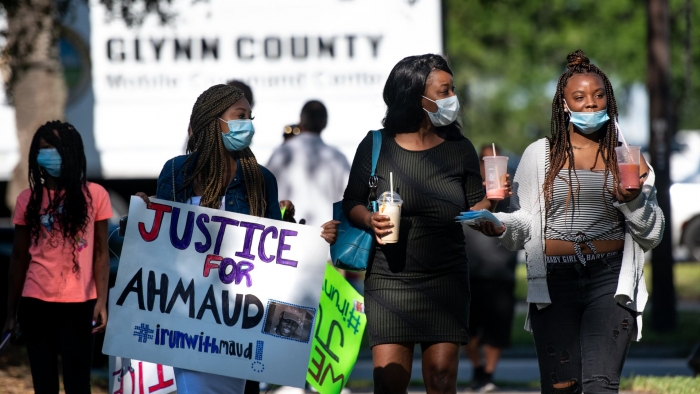 Demonstrators rallied Saturday to demand the resignation of two Georgia prosecutors over the investigation into the death of Ahmaud Arbery, a 25-year-old black man who was shot while out jogging, per a JUSTGeorgia Coalition statement.

Why it matters: President Trump and Democratic presidential candidate Joe Biden both spoke out over Arbery's Feb. 23 death after cellphone video of his apparent shooting sparked a national outcry. The Justice Department is investigating whether the shooting was a hate crime.

John Williams had just finished his fourth novel and was trying to figure out how to sell it. His 1967 book, The Man Who Cried I Am, focused on a CIA plot to...

Black Lives Matter was created in 2013 by three Black women — Alicia Garza, Patrisse Cullors, and Opal Tometi — in response to the acquittal of Trayvon Martin’...

In 1919, the pioneering newspaper editor and civil rights activist Monroe Trotter obtained papers to work as a cook on a ship sailing from the United States to...

(CNN) - President Donald Trump on Sunday morning told America who he believes are "great people." They're the supporters who scream "white power" in response...

Beyond ‘40 acres and a mule’: Commentary on reparations
ANALYSIS

George Floyd’s death just over a month ago at the hands of Minneapolis police has upended this country – yielding social unrest, public uprisings, and renewed...

Rate Bias
Race and Racism
I opposed taking Woodrow Wilson’s name off our school. Here’s why I changed my mind.
OPINION

The Princeton University Board of Trustees voted on Friday to remove Woodrow Wilson’s name from the university’s School of Public and International Affairs. It...

Military Gears Up to Fight Racial Bias, a Longstanding Adversary

The U.S. government has tried at least six times since World War II to root out discrimination and racial bias in the military, through commissions,...

White House press secretary Kayleigh McEnany on Monday defended President Trump's retweet a day earlier in which the president shared a video of a man in...

6 ways to invest in racial justice

Antiracism protests have called for action and change in our police departments and other systems that have historically oppressed people of color — including...

Just in the past few weeks, demonstrators — mobs, really — have destroyed or defaced the following statues across the United States. Or, unelected bodies have...

Redskins' Daniel Snyder has thumbed his nose at changing team's name, now demands are at...

Daniel Snyder bought the Washington Redskins in 1999 but he has never faced as much pressure to change the name of the team as he is facing now, when symbols...

Change.org deleted a petition that calls on Cambridge University to fire a professor who declared that "white lives don't matter" after the petition gained...