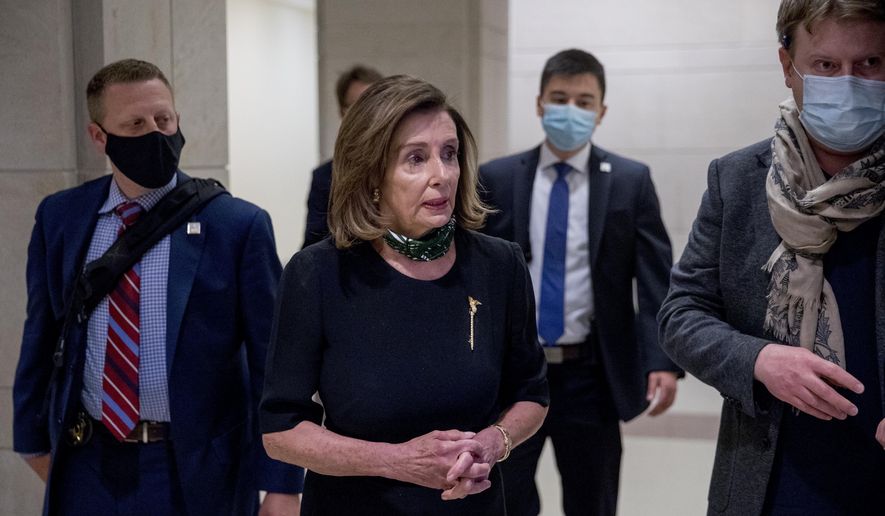 At a press conference, Mrs. Pelosi, California Democrat, argued that there was a double standard for Democrats, pointing out that the initial versions of the $2.2 trillion CARES Act and the emergency interim bill for small business loans were put out by the GOP.

Democrats objected to both of those early proposals and bipartisan packages were negotiated.

NEWS
The truth about masks
The Week - News

Go ad-free!   About these ads
More news about Coronavirus
https://www.washingtontimes.com/news/2020/may/14/pelosi-dismisses-partisan-wish-list-jab-3-trillion/

On Dec. 15, 2016, the nation’s largest nursing home lobby wrote a letter to Donald Trump, congratulating the president-elect and urging him to roll back new...

The World Is Still Far From Herd Immunity for Coronavirus

The coronavirus still has a long way to go. That’s the message from a crop of new studies across the world that are trying to quantify how many people have...

Days before she tested positive for COVID-19 in early April, Tanya Beckford was already worried about dying because of the conditions in the Connecticut...

Wisconsin saw a record number of new coronavirus cases and deaths reported in a single day on Wednesday, two weeks after the state’s Supreme Court struck down...

Governors such as Gretchen Whitmer of Michigan, Andrew Cuomo of New York and Mike DeWine of Ohio have been the most high-profile politicians leading the...

The truth about masks

How do masks fight COVID-19? The mouth and nose are usually where the coronavirus first sets up camp, and also serve as the portals for spreading the virus to...

Some Nursing Homes Escaped Covid-19—Here's What They Did Right

How Covid-19 could redesign our world

The coronavirus crisis is reshaping the world. One transformation that might be here to stay? How our restaurants, gyms, bars and parks are designed – and how...

The novel coronavirus has killed more than 100,000 people in the United States, according to a Reuters tally on Wednesday, even as the slowdown in deaths...

From Camping To Dining Out: Here's How Experts Rate The Risks Of 14 Summer Activities

It has been around two months of quarantine for many of us. The urge to get out and enjoy the summer is real. But what's safe? We asked a panel of infectious...

Data: 42 Percent of US Coronavirus Deaths Are Linked to Nursing Homes, Where Less Than One Percent...

The heartbreaking statistic relayed in my headline is not, as some have suggested, an attempt to diminish the tragedy of the tens of thousands of Americans who...

On March 30, as COVID-19 cases and deaths piled up across the Empire State, and the USS Comfort arrived to calm a broken city, Gov. Andrew Cuomo called New...

The Return of the Tea Party
OPINION

Being told what to do by epidemiologists and officials wielding SCIENCE as their authority has been enough to bring Tea Party–era liberty back in vogue. It’...

Almost exactly three months ago, the first major outbreak of COVID-19 within the United States occurred at a nursing home in Washington state. Now, after...