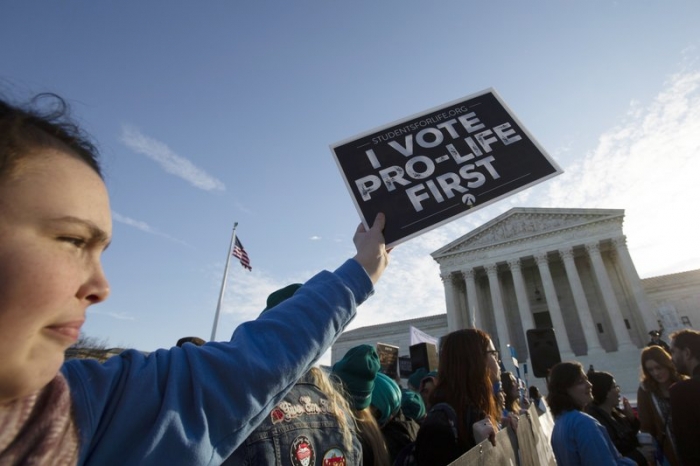 Roberts did not say enough to tip his hand in an hour of spirited arguments at the high court Wednesday.

The court’s election-year look at a Louisiana dispute could reveal how willing the more conservative court is to roll back abortion rights. A decision should come by late June.

The outcome could have huge consequences at a time when several states have...

AllSides Media Bias Rating: Center
You disagree.
Thank you! Community votes alone don't determine our ratings, but are valuable feedback and can prompt us to do more research.
96974/78679

The Supreme Court on Monday agreed to take up a blockbuster dispute over a Mississippi ban on abortions after 15 weeks of pregnancy, setting up a high-stakes...

The Supreme Court on Monday agreed to take up a major abortion case next term concerning a controversial Mississippi law that banned most abortions after 15...

The Most Rev. Salvatore J. Cordileone was careful not to name any Catholics in his latest letter calling for Holy Communion to be withheld from public figures...

Getting Rid Of This One Piece Of Legislation Could Transform Abortion Access. But, Will It Happen?
ANALYSIS

In 1976, House Republicans proposed the Hyde Amendment, which bans the use of federal funds from covering the cost of abortion care for poor and low-income...

The battle over abortion rights has a dramatic new front: the fight over whether the Biden administration will make pills available online. Even as they...

The Supreme Court on Monday set the stage for a major ruling next year on abortion – one that could upend the Supreme Court’s landmark decisions in Roe v. Wade...

The Supreme Court on Monday agreed to consider the legality of a Mississippi abortion law that seeks to ban the procedure after 15 weeks of pregnancy, a case...

On a Saturday in February, four women came to a reproductive health clinic in Rawalpindi, Pakistan, seeking to end their pregnancies. Three of the four were...

The Biden administration is moving to reverse a Trump-era family planning policy that critics describe as a domestic "gag rule" for reproductive healthcare...

Anti-abortion bills abound; their fate in court is unknown

At an intense pace, lawmakers in Republican-governed states are considering an array of tough anti-abortion restrictions they hope might reach the Supreme...

The Supreme Court is set to hear a major abortion case that will give the justices an opportunity to reconsider the precedent set by the landmark Roe v. Wade...

The Supreme Court agreed on Monday to hear a major abortion case, Dobbs v. Jackson Women's Health, from Mississippi. The law in question, the Gestational Age...

Pro-life advocates worry that an abortion-friendly political agenda has worked itself into the medical specialty of obstetrics and gynecology. Now, OB-GYN...

The Supreme Court will meet privately on Friday to consider if it should take up a Mississippi law banning abortions after 15 weeks of pregnancy. As various...