US election: How left-wing is the Democratic field?

Elections, 2020 Election, left-wing, Liberalism, moderate Democrats, Democratic Party
Save for Later
Add to My Front Page
From The Center 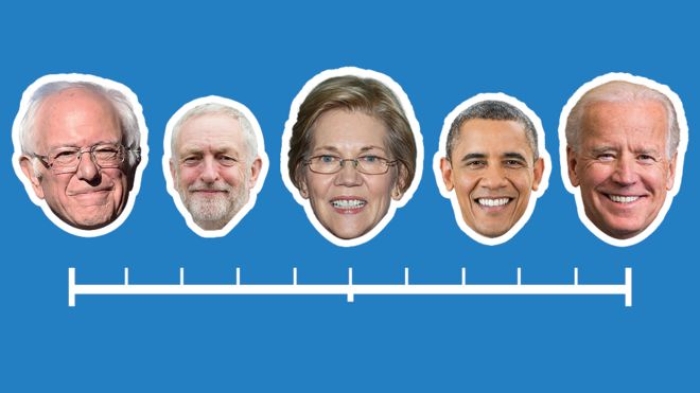 The US Democratic Party is undergoing something of an identity crisis as it debates what direction to take ahead of the looming battle with President Donald Trump, a Republican, in November.

A tension between the so-called progressive wing of the party, led by Bernie Sanders and Elizabeth Warren, and the moderates like Joe Biden, Amy Klobuchar and Pete Buttigieg is dominating the primary elections.

Let's break it down by issues and compare the current field to figures in history and leading politicians from the UK.

When there's a Democratic nominee,...

NEWS
Dealing with Manchin and Sinema: Democrats finally ditch the carrot and pick up the stick
Salon

D.N.C. Staff to Join Union, in a Milestone for Labor

Staff members at the Democratic National Committee are set to be represented by a union, the first time a national party organization will have a unionized...

The federal eviction moratorium ends today, and housing rights advocates and tenants around the country worry that anywhere between hundreds of...

COVID-19 has dominated world politics for the last year, but the burgeoning climate crisis still casts a long shadow over the coming decades. What have we...

Democratic Sen. Kyrsten Sinema of Arizona is batting away criticism that her bipartisan approach to legislating is bad for her party. To Sinema, a moderate...

How House Democrats' Campaign Chief Plans To Defy History In 2022

To retake control of the House of Representatives, Republicans need to pick up just five seats in the 2022 midterm elections. It's Congressman Sean Patrick...

House Democratic leaders failed to round up enough votes Friday to pass legislation extending the federal ban on evictions just two days before it is set to...

Members of the Democratic so-called “Squad” are blasting Sen. Kyrsten Sinema (D-Ariz.) after she came out in opposition to a $3.5 trillion spending...

How Biden's bipartisanship could hurt Democrats in 2022
OPINION

The White House is betting bipartisanship will help President Joe Biden and congressional Democrats hold on to power after next year's midterm...