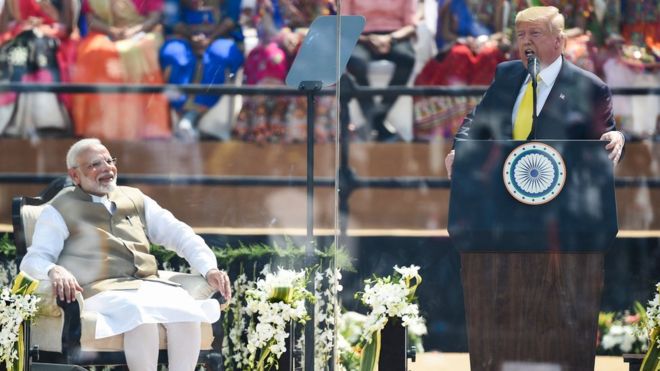 The speech praised India's Prime Minister Narendra Modi and highlighted the success of recent policies to improve the country.

We looked at some of the claims.

Claim 1: Trump said: "Since the turn of the century, the size of the Indian economy has grown over six times in size."
Reality check: Measured in terms of GDP - the sum of the value of goods and services produced in the economy - President Trump is correct.

AllSides Media Bias Rating: Center
You disagree.
Thank you! Community votes alone don't determine our ratings, but are valuable feedback and can prompt us to do more research.
73464/62333

NEWS
No, President Trump, the never-ending war in Afghanistan is not ending
Chicago Sun-Times

Have We Learned Anything From The Iraq War?
ANALYSIS

Seventeen years ago, the U.S. and some of its allies launched an illegal invasion for the express purpose of overthrowing the Iraqi government using the bogus...