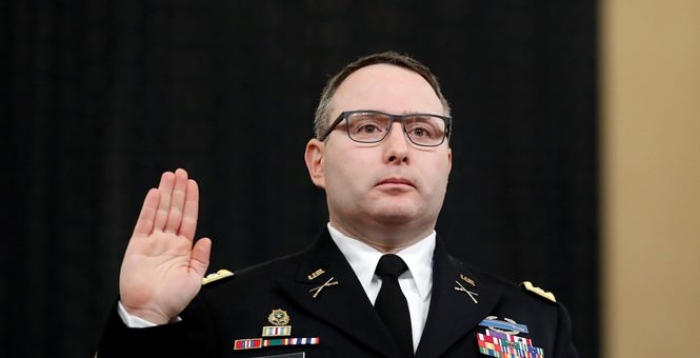 Lt. Col. Alexander Vindman has been fired from the National Security Council and escorted out of the White House.

“Today, Lieutenant Colonel Alexander Vindman was escorted out of the White House where he has dutifully served his country and his President. He does so having spoken publicly once, and only pursuant to a subpoena from the United States Congress," Vindman's attorney released in a statement.

Vindman's ousting comes as part of a restructuring of the NSC, which has been in the works for months.

HEADLINE ROUNDUP
Debate Heats Up Over When, How to Reopen Schools for the Fall

The Traditional Interpretation of the Pardon Power Is Wrong
ANALYSIS

Rate Bias
Impeachment
'I sleep at night': Ex-Trump adviser John Bolton says his testimony would not have...

Rate Bias
Impeachment
Bolton: 'My testimony would have made no difference' in 'partisan' impeachment...

Trump impeachment backfires on Democrats, and Nancy Pelosi has a meltdown
OPINION

The partisan impeachment of President Donald Trump finally passed, mercifully, like a kidney stone, with Democrats grimacing helplessly during acquittal in the...