Homeless US student population 'highest in over a decade' 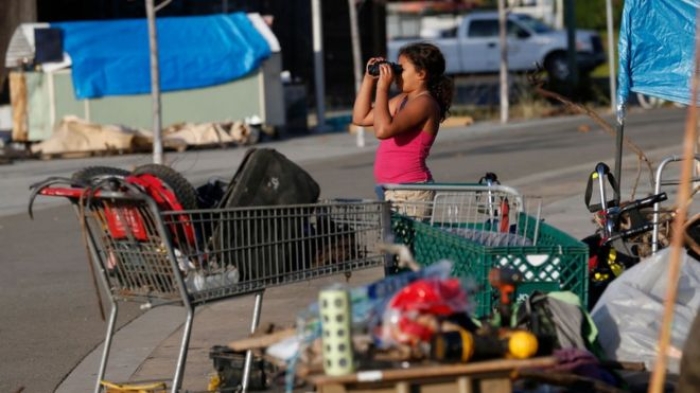 The number of homeless students in the US is the highest in over a decade according to a new study.

Most of the 1.5 million homeless schoolchildren stayed with other families or friends after losing their homes.

But 7% lived in abandoned buildings or cars, the report by the National Centre for Homeless Education showed.

It is often caused by job insecurity, unaffordable housing, domestic violence and recently the opioid crisis.

Less than a third of homeless students were...

Mayor Eric Garcetti’s top advisor on homelessness has told her colleagues she will be resigning at the end of the month, The Times has learned. This comes...

The Coming Eviction Crisis: ‘It’s Hard to Pay the Bills on Nothing’
OPINION

In Columbus, Ohio, judges have relocated eviction hearings to the cavernous halls of the city’s convention center, to ensure there’s plenty of space for the...

Latoyia Lorraine is about to lose the one thing that has kept her family safe during a pandemic: her home. We ask that you credit our newsroom at the top...

We Take Homelessness for Granted. The Pandemic Should Change That.
ANALYSIS

A Wave of Evictions Would Be Bad for Everybody
OPINION

Even before the coronavirus pandemic, the U.S. rental market was in trouble. In 2017, economist Andrew Dumont calculated that 46.8% of U.S. renter households...

One-Third of American Renters Expected to Miss Their August Payment

Renters across America are wading into unknown territory. With the lapse of the federal moratorium on evictions that expired July 31 and the end of the $600...

Next pandemic threat to economy: A wave of evictions

Government aid for individuals during the pandemic was speedy but also limited in its duration. The expiration of eviction bans is a test of whether the U.S....

Will foreclosures explode once the moratorium is lifted?
OPINION

Remember the nursery rhyme refrain, “We all fall down?” The incredible uptick of COVID-19 is like a raging California wildfire. Earlier this week Dr....

The White House and a growing number of congressional Republicans support a renewal of the federal evictions moratorium and rental assistance payments in the...

Thousands of homeless people have been housed in several of San Francisco’s empty hotels in an effort to slow the spread of coronavirus. However, City...