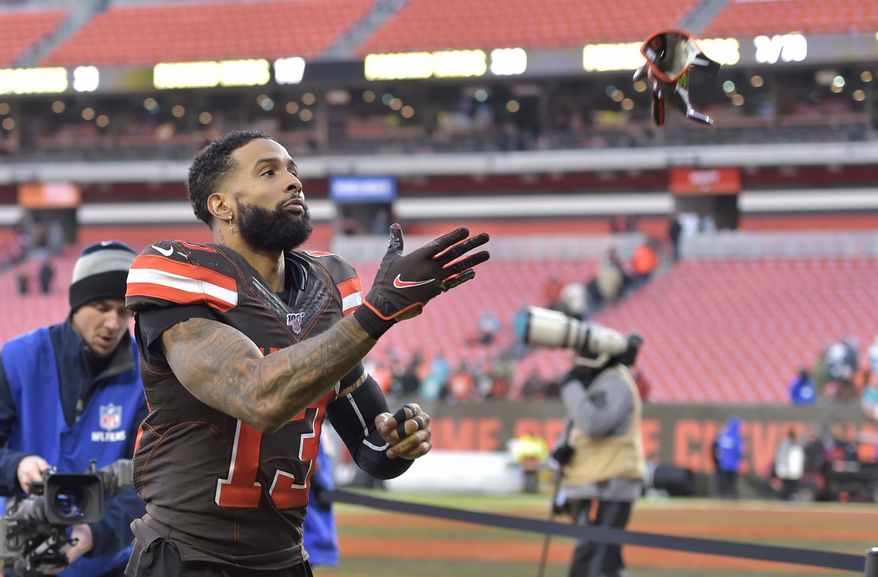 The New Orleans Police Department issued an arrest warrant Thursday for wide receiver Odell Beckham Jr., accusing the Cleveland Browns star of simple battery after a video showed him apparently slapping a male officer’s behind at the Mercedes-Benz Superdome this week.

On Monday, Beckham attended LSU’s win in the BCS championship game over Clemson. The 27-year-old, an LSU alum, was celebrating the victory in the locker room when he made contact with an officer, who was chastising another player

AllSides Media Bias Rating: Lean Right
You disagree.
Thank you! Community votes alone don't determine our ratings, but are valuable feedback and can prompt us to do more research.
80860/68180

Go ad-free!   About these ads
More news about Sports
https://www.washingtontimes.com/news/2020/jan/16/odell-beckham-jr-issued-arrest-warrant-slapping-po/

(CNN) - Major League Baseball (MLB) owners have finalized a plan that may allow the 2020 season to start on Fourth of July weekend, according to multiple...

Coronavirus Will Make This a Very Hard Year for Sports Fans

On Sunday, soccer superstar Christian Ronaldo lost control of a cross at the top of the six-yard box that teammate Aaron Ramsey picked up and swiftly buried...

US President Donald Trump will inaugurate the world's largest cricket stadium when he arrives in Ahmedabad in the home state of Prime Minister Narendra Modi on...

The Kansas City Chiefs’ racist “Arrowhead Chop” has flown under the radar. Not anymore.
OPINION

A self-described lifelong Kansas City Chiefs fan once asked me the meaning of the words that are sung as the crowd performs the “Arrowhead Chop” at Chiefs...

Even before kickoff, referees to make history in the Super Bowl

When the officiating crew takes the field for Super Bowl 2020 in Miami on Sunday, they will make history before the coin toss. Five of its seven members are...

Senators anxious for football to start, but maybe not as anxious as Trump

It’s been more than two months since a major American sport has held a contest. March 11 was the day the NBA suspended play indefinitely after Utah Jazz center...

As Major League Baseball reportedly prepares to present players with its plan on opening the 2020 season, one group of players with a particular eye on the...

70% of US Olympic sports applied for PPP funds

DENVER (AP) — At least 70 percent of U.S. Olympic sports organizations have applied for government funds during the coronavirus pandemic, a stark financial...

Boy, can we use baseball’s return
OPINION

Here’s a ray of sunshine: Major League Baseball is moving to start the season around the Fourth of July. Fans won’t be able to attend Opening Day in person...

Two NBA players, both members of the Utah Jazz, have now tested positive for coronavirus, and teammates have suggested to reporters that “careless” behavior in...

Colin Kaepernick: ‘I want to tell the story’ behind taking the knee

Colin Kaepernick is ready to tell his story. The former San Francisco 49ers quarterback hasn’t given many interviews in the four years since he became a...

Officials in Los Angeles said late Sunday that dense fog in Southern California likely played a role in the deadly crash in Calabasas that claimed the lives of...

The pilot of Kobe Bryant’s helicopter was warned he was flying dangerously low before he crashed into a California mountainside at around 185 mph, killing all...