Iran pulling out of nuclear deal commitment after U.S. strike that killed Soleimani 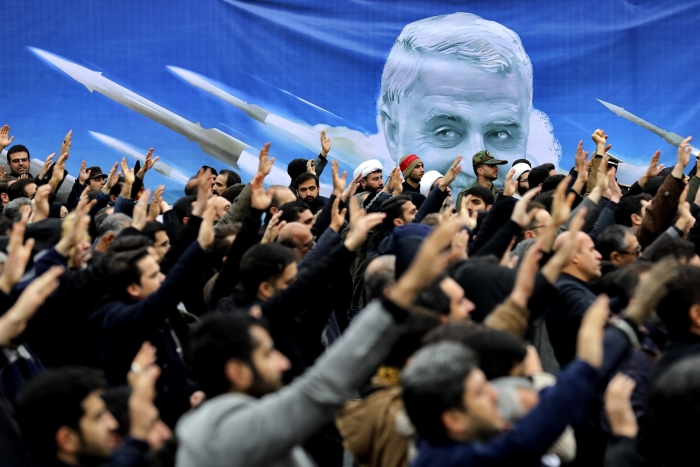 Iran said Sunday that it was ending its commitment to limit enrichment of uranium as part of its 2015 nuclear deal with world powers, more fallout from the U.S. strike that killed Gen. Qassem Soleimani.

AllSides Media Bias Rating: Lean Left
You disagree.
Thank you! Community votes alone don't determine our ratings, but are valuable feedback and can prompt us to do more research.
96974/78679

North Korea has launched a pair of projectiles for the second time in a week. The launch was confirmed to ABC News by the South Korean joint chiefs of staff...

President Joe Biden sent a letter to congressional leadership Saturday explaining the reasoning behind Thursday's airstrike in Syria, which has been criticized...

U.S. President Joe Biden is intent on restoring the 2015 nuclear agreement with Iran, and with talks resuming in Vienna on Thursday after a weeklong break, his...

Pentagon airstrikes against Iran-backed militias in Syria are not only the first military action taken by President Joe Biden. They are a test of his broad...

As officials in Washington consider returning to the 2015 Iran nuclear deal, much of the debate has centered on whether the U.S. government will lose leverage...

American diplomats will return to the negotiating table next week to begin talks on a return to the Iran nuclear deal. The State Department confirmed Friday...

President Biden originally ordered two airstrikes in Syria last week, but called one off after learning just 30 minutes before the bombs were scheduled to drop...

Democrats Ask Biden To Give Up Sole Authority On Nuclear Launches

A group of more than 30 House Democrats has asked President Joe Biden to cede his sole authority to launch nuclear weapons. In a letter penned by Rep. Jimmy...