The trade war is kind of working

China, manufacturing, Small Businesses, global markets, Donald Trump, Trade
Save for Later
Add to My Front Page
From The Center 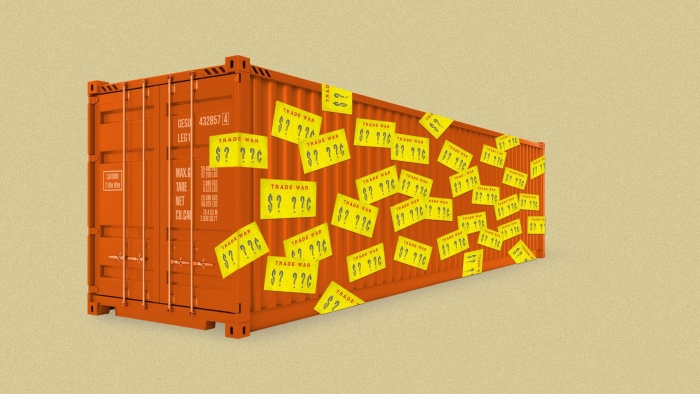 U.S. manufacturers and small businesses have been hit hard by the trade war, but recent data shows that China is really suffering.

Driving the news: China's total exports fell for the 12th straight month in November, dropping 1.1% from a year ago, and exports to the U.S. have fallen more than 20%, according to China’s customs administration.

Economists had expected shipments to rise 1%, as retailers and companies stock up for Christmas, per Reuters.
What's happening: The U.S. trade deficit declined 7.6% in October to $47.2 billion, the smallest...

NEWS
Instead of Lifting Trump's Tariffs, Biden Is Imposing More of Them
Reason

Chinese President Xi Jinping has warned global leaders against starting a “new Cold War” and urged unity in the face of the coronavirus pandemic. “To build...

The Trump administration Wednesday issued a sweeping ban on imports of cotton or tomato products from China’s Xinjiang region, saying it had reviewed evidence...

Brexit Is Finally Done, but It Already Seems Out of Date
ANALYSIS

LONDON — It took 11 grueling months for negotiators from Britain and the European Union to hammer out the terms of a post-Brexit trade deal. But in many...

A Speculative Frenzy Is Sweeping Wall Street and World Markets

Animal spirits are famously running wild across Wall Street, but crunch the numbers and this bull market is even crazier than it seems. Global stocks are...

In her confirmation hearing, U.S. Trade Representative Katherine Tai stated that “trade is like any other tool in our domestic or foreign policy. It is a means...

The Supreme Court on Thursday curbed the Federal Trade Commission’s longtime practice of seeking to recover ill-gotten gains in court from companies and...

Five days after a skyscraper-sized container vessel was dislodged from the Suez Canal, the backlog of ships waiting to cross through the Egyptian waterway has...

Eight large tugboats were continuing a struggle to free a giant container ship lodged crossways in the Suez Canal after the vessel ran aground earlier this...

Transatlantic alliance due for a reset. But what about China?
ANALYSIS

As tweets go, certainly by the standards of the outgoing Trump administration, it was downright benign, the cyber equivalent of a tap on the shoulder. Yet it...

Lumber Is Crazy Expensive Right Now. Biden Is About To Make It Worse.
ANALYSIS

Amid surging lumber prices that are already adding an average of $36,000 to the construction cost of new homes, the Biden administration is moving...

Sen. Josh Hawley (R., Mo.) introduced a bill Wednesday aimed at reducing Chinese control over technology used by the Department of Defense and its contractors...

Ford announced it is moving a nearly $1 billion project from Ohio to Mexico, prompting criticism from a major labor union and silence from the Biden...

Instead of Lifting Trump's Tariffs, Biden Is Imposing More of Them
ANALYSIS

President Joe Biden's first major trade policy move will be disappointing for anyone who hoped his inauguration would put an end to the presidential practice...

WHO Defends China Over Transparency Allegations

World Health Organization (WHO) officials pushed back Monday against claims that China is not being transparent with a United Nations-led (UN) investigation...