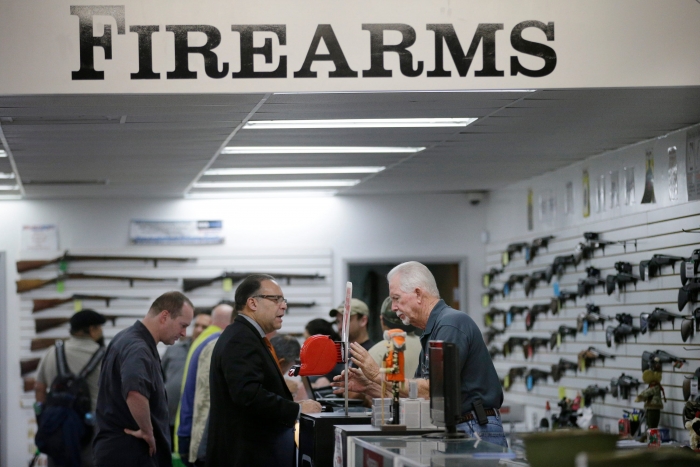 WASHINGTON – The FBI is handling a surge in background checks this year after a series of mass shootings has renewed calls for more restrictive gun laws.

Some of the biggest spikes came in August and September after attacks in El Paso and Odessa, Texas, and Dayton, Ohio, that left 38 people dead.

Past spikes in background checks, a rough barometer of gun sales, have been driven by fears that lawmakers would tighten gun laws.

“People respond to what they perceive as threats to their (Second Amendment) rights, and...

The gun-violence prevention organizations March For Our Lives, Brady and Team Enough launched a joint campaign on Wednesday focused on voting rights in an...

Authorities in St. Louis have executed a search warrant at the home of the couple who made national headlines when they brandished a pair of guns at Black...

Couple that pointed guns at protesters in viral video speaks out: We were 'in fear for our...

A white couple that was seen in viral footage over the weekend pointing guns at protesters outside their home in St. Louis said on Monday that they were afraid...

‘Guns are flying off the shelf.’ Permit applications up more than 500% amid coronavirus pandemic...

Take your pick. The pandemic, the police killing of George Floyd, the presidential election. Protests, looting, calls to “defund the police.” Any one of...

Speaker Nancy Pelosi (D-Calif.) on Friday renewed her call for gun control measures to mark the four-year anniversary of the shooting at the Pulse Nightclub in...

St. Louis authorities confiscated an AR-15 used by Mark McCloskey, who made headlines with his wife Patricia last month when they defended their historic...

No, ‘Gun Violence’ Is Not To Blame For The Spike In Violent Crime
OPINION

With violent crime skyrocketing in American cities, local officials and mediahave blamed the deaths of innocent children and mostly African-American victims on...