DeVos held in contempt of court in loan forgiveness dispute 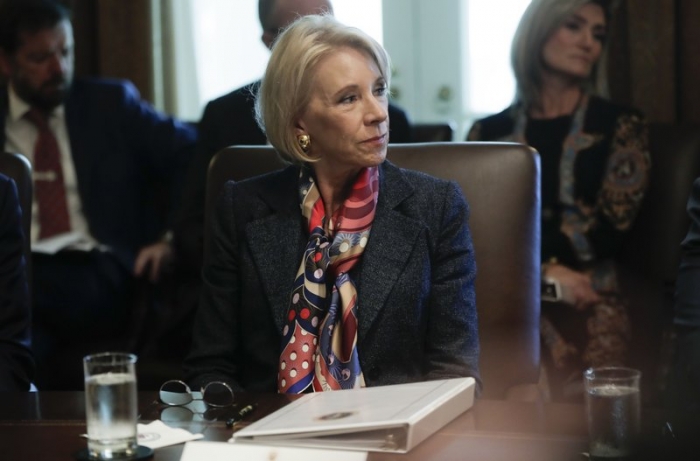 WASHINGTON (AP) — A federal judge has held Education Secretary Betsy DeVos in contempt of court for violating an order to stop collecting loans from thousands of former for-profit college students.

Kim previously ordered DeVos to stop collecting federal loans from former Corinthian Colleges students who applied for loan forgiveness after the chain shut down in 2015 amid allegations of fraud.

The Obama administration sought to make it easier for defrauded...

HEADLINE ROUNDUP
Debate Heats Up Over When, How to Reopen Schools for the Fall

These 8 Basic Steps Will Let Us Reopen Schools
OPINION

If we move too fast, ignore science, or reopen without careful planning, this will backfire. In any other July, millions of American schoolchildren, their...

President Donald Trump’s push to reopen America’s schools is about more than children’s education. It’s about the economy. And it’s about his reelection....

Education Secretary Betsy DeVos on Tuesday lashed out at school districts that haven't promised to fully reopen their schools this fall, blasting education...

Some Schools Are Now Online-Only Due To The Coronavirus. ICE Says Their International Students Must...

Immigration and Customs Enforcement officials said Monday that international students who are taking classes entirely online this fall will not be allowed to...

Rate Bias
Education
All the ways the coronavirus will make this school year harder than the last, even if campuses...
ANALYSIS

School communities desperate for normalcy are hoping that the new school year will be more stable than the last, when the coronavirus forced schools to close...

Reopening schools: Do the benefits outweigh the risks?

What’s happening Schools across the country were closed in March as part of the effort to contain the early stages of the coronavirus pandemic in the United...

In the latest move from the Trump administration to push for states to reopen schools this fall, Vice President Pence couched guidance from the Centers for...

The US Immigration and Customs Enforcement (ICE) agency said people could face deportation if they do not comply with the rules. Many universities are...

The number of high school seniors applying for U.S. federal college aid plunged in the weeks following the sudden closure of school buildings this spring — a...

CDC is 'prepared to work with every school district' for safe reopenings, director says...

Centers for Disease Control and Prevention Director Robert Redfield on Wednesday said the agency is “prepared to work with every school district” to create a...

What Are Schools For?
ANALYSIS

Hint: The education of children. In his excellent new book, Charter Schools and Their Enemies (full review forthcoming in National Review) Thomas Sowell...

The American Academy of Pediatrics is recommending schools reopen this fall with students "physically present" in their classrooms, as the negative impacts are...

Lots of parents of special-education and special-needs kids don’t think remote learning is working for their children and are pushing for in-person summer-...

How the pandemic should make us rethink college financial aid
OPINION

‘Why should we ­reward colleges with more funds for raising their rates?’ Applications for college financial aid are down dramatically this year. Yet given...