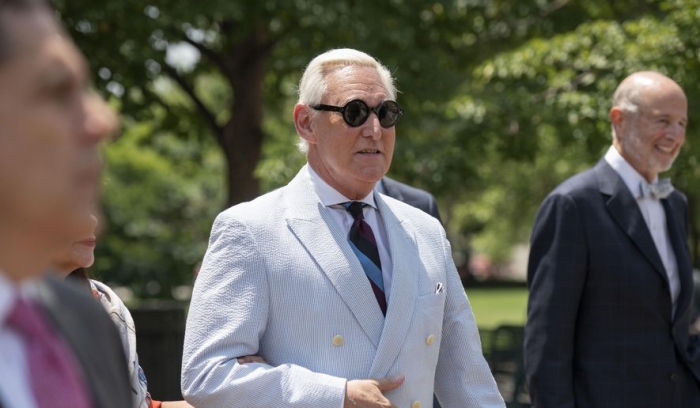 “The government will not be permitted to introduce the clip itself in its case in chief because the prejudicial effect of the videotape, which includes a number of extraneous matters, outweighs its probative value,” Judge Jackson wrote in an eight-page opinion.

However, she said prosecutors can use a...

NEWS
Thousands of U.S. judges who broke laws or oaths remained on the bench
Reuters

A federal judge has ordered longtime Donald Trump confidant Roger Stone to prison on July 14 and into home confinement until then, citing Stone's own evidence...

(CNN) - The Trump administration doesn't have the authority to divert Pentagon funds to construct additional barriers on the US-Mexico border, a federal...

“In One Day, We Became the Worst Things in the Country”
ANALYSIS

How cops are talking about George Floyd’s killing and the protests sweeping America. This country is changing its mind about the police. Over the past few...

Maryland lawmakers have introduced legislation to do a little Capitol remodeling. Specifically, they’re hoping to swap out a bust adorning the old Supreme...

Thousands of U.S. judges who broke laws or oaths remained on the bench

Judge Les Hayes once sentenced a single mother to 496 days behind bars for failing to pay traffic tickets. The sentence was so stiff it exceeded the jail time...

Will focus on racial justice give Black candidates a boost?

As voters head to the polls for primary elections Tuesday, a rising challenge to the status quo cuts across racial and generational lines – and seems to be...

Minnesota’s attorney general added an upgraded charge of second-degree murder against one former police officer and charged three others in the death of George...

On the evening of June 28, 2008, Officer Paul Abel of the Pittsburgh Police Department was celebrating his wife’s birthday. During the celebration, he consumed...

House Judiciary Committee Chairman Jerrold Nadler is expected to issue a subpoena to compel Attorney General Bill Barr to testify before the panel on the...

Was the Search Warrant for the Drug Raid That Killed Breonna Taylor Illegal?
ANALYSIS

The information in the no-knock warrant application was based purely on guilt by association. When Louisville, Kentucky, Detective Joshua Jaynes applied for...