Justice Gorsuch: 'It's About Honoring the Words' of the Founders 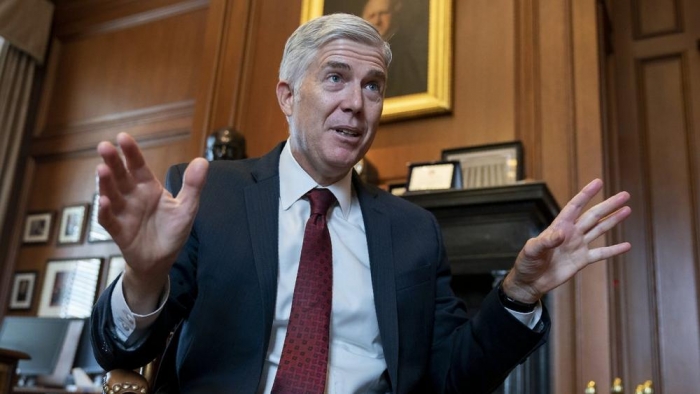 Supreme Court Justice Neil Gorsuch has written a new book highlighting his judicial philosophy and emphasizing the original meaning of the Constitution.

"A Republic, If You Can Keep It," was written because Gorsuch "wanted to say something about the Constitution, the separation of powers and the judge's role in it," he told The Washington Post.

The title is taken from a comment, reportedly made by Benjamin Franklin in response to a question about what kind of government the delegates created at the Constitutional Convention.

Gorsuch, 52, was nominated by President...

John Roberts has had enough of Trump's bad faith
OPINION

In joining with the Supreme Court's four liberal justices to block Trump administration plans to end the Deferred Action for Childhood Arrivals, or DACA,...

President Trump and presumptive Democratic presidential nominee Joe Biden have both made shaping the Supreme Court’s agenda central to their campaign pitches,...

The Supreme Court on Thursday blocked the Trump administration's attempt to end the Deferred Action for Childhood Arrivals, an Obama-era program that protects...

The winners at the Supreme Court this week were the nation's LGBTQ community and undocumented immigrants. The losers were conservatives, led by President...

In a 5-4 ruling that affects more than 600,000 immigrants who were brought to the U.S. as children, high court says administration didn’t provide sufficient...

So Aldaba took the only other route open to people in her situation: She sued. Her lawsuit in federal district court in Muskogee, Oklahoma, alleged that the...

The U.S. Supreme Court on Monday turned away a challenge to President Donald Trump's tariffs on imported steel brought by an industry group that had argued...

Knock, knock. Who’s there? Unelected leftist politicians in robes with lifetime tenure. Turns out, the Supreme Court is a joke, and the punchline is Chief...