What does this hat mean to Americans? 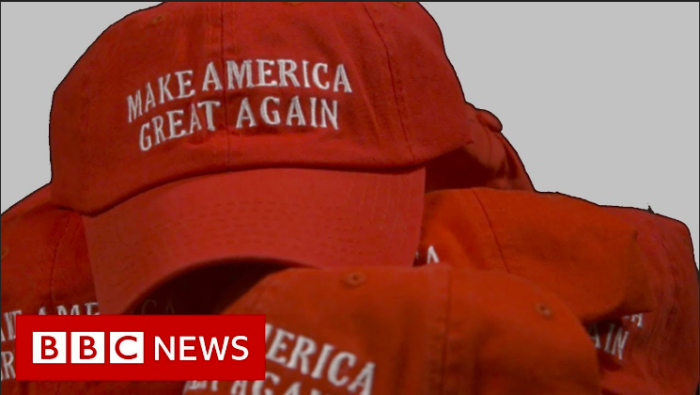 As President Donald Trump prepares to launch his re-election bid, his campaign has announced it is close to selling the millionth official Make American Great Again (MAGA) hat. The BBC takes a look at the origins of the signature red hat and its message, and what it means to Americans.

PERSPECTIVES BLOG
Speak up or Shut up: How Conversational Cowardice is Killing this Country

NEWS
Watch: In Final Message, Trump Says 'We'll Be Back in Some Form'
Townhall

President-elect Joe Biden plans to take 17 executive actions during his first hours in office Wednesday, moving faster and more aggressively to dismantle his...

Joe Biden’s transition team had no illusions about the chaos they were inheriting from President Donald Trump. They expected a disorganized government and...

On his way out of office, Trump distorts the Constitution to serve his ego and personal interests. President Trump’s last-minute pardons betray what the...

Joe Biden will launch presidency with appeal for unity – but whose unity?

When Joe Biden takes the oath of office on Wednesday, the new president will appeal for national unity from the steps of the US Capitol, where two weeks ago a...

President-elect Joe Biden on his first day in office will take a range of executive actions, including implementing a national mask mandate on federal property...

President Donald Trump, who has repeatedly used his clemency authority as a political tool rather than an act of mercy, issued a final wave of pardons and...

Biden's inauguration unprecedented in US history

President-elect Joe Biden’s inauguration on Wednesday will look like no inauguration before it in American history. Biden will take the oath of office in...

President-elect Joe Biden plans to take immediate action to turn the page on the Trump era after his inauguration speech this week, chief of staff Ron Klain...

Census Bureau Director Steven Dillingham said Monday he plans to resign, days after a government watchdog questioned his requests for data relating to the...

Let's be honest: The right is making a forced retreat. Here's how we can make it a strategic one that sets our ideas up for better success in the long run....

President-elect Joe Biden is about to be sworn into office, when he will immediately face the left wing of his party and large Republican minorities in both...

These are among the darkest days of American democracy. With nearly airtight totalitarian uniformity, the American media robotically repeat that there is no...