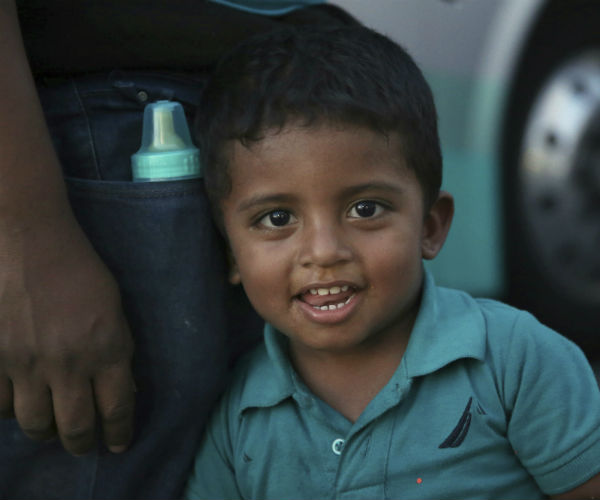 The Trump administration unveiled new rules Wednesday that would allow officials to detain migrant families indefinitely while U.S. judges consider whether to grant them asylum.

They are part of the administration's effort to stem the swelling tide of families and unaccompanied minors crossing the U.S.-Mexico, and are certain to draw legal challenges.

Administration officials blame the so-called Flores Settlement Agreement for a spike in immigration, saying it encourages migrants to bring children with them...

AllSides Media Bias Rating: Lean Right
You agree.
Thank you! Community votes alone don't determine our ratings, but are valuable feedback and can prompt us to do more research.
74084/62722

As coronavirus spreads, undocumented immigrants are losing jobs with no financial safety net

As Congress hammered out a $2 trillion stimulus plan to help those left jobless by the coronavirus pandemic, the most vulnerable were once again invisible: Not...

To show love for the Irish on St. Patrick's Day, give them green cards instead of green beer
OPINION

If it weren’t for a certain virus plaguing the world at this moment, more than half the American population — an estimated 57 percent — would be celebrating St...

The message about coronavirus to the public is loud and clear: If you feel sick, call your doctor. There is nothing wrong with the message. But not everyone...

The Supreme Court Keeps Handing Trump Immigration Victories. They Just Did It Again.

The Supreme Court will allow the Trump administration to continue to force asylum seekers back to Mexico while they await their US court dates. In an order...

Plunge into the progressive discourse on immigration, and you’ll quickly hear that it’s not enough just to legalize America’s 11 million unauthorized migrants...

U.S. Customs and Border Protection confirmed Monday that it would deport unaccompanied immigrant children apprehended at the border as a step to avoid further...

A federal judge ruled U.S. Citizenship and Immigration Services (USCIS) improperly denied an H-1B petition after the agency claimed the position did not...

Even as U.S. immigration officials have pushed to deport hundreds of Iraqi Christians over the last few years, asserting in court that they are unlikely to be...

It often feels like the only certainty in Charlene D’Cruz’s life these days is uncertainty. But there are always ways to maintain some semblance of routine...

The 2nd U.S. Circuit Court of Appeals ruled Wednesday that the Trump administration can withhold millions of dollars in federal law enforcement grants from...

Donald Trump Responds to Illegals Not Getting Stimulus Checks: ‘They Came in Illegally’

President Donald Trump was asked by a reporter on Wednesday about “undocumented” immigrants not getting a stimulus check from the government as part of the...

Activists have criticized the historic $2 trillion stimulus bill recently passed by Congress for failing to give money to illegal immigrants. “When stimulus...

The Immigration and Customs Enforcement agency, or ICE, announced Wednesday that it would halt some immigration enforcement and deportation efforts while the...

Immigration and Customs Enforcement said Wednesday that it will temporarily halt deportation efforts amid the coronavirus pandemic, except for those deemed a...

The Justice Department (DOJ) announced on Friday that it is finalizing a rule to collect DNA samples from illegal immigrants who are in federal custody. The...