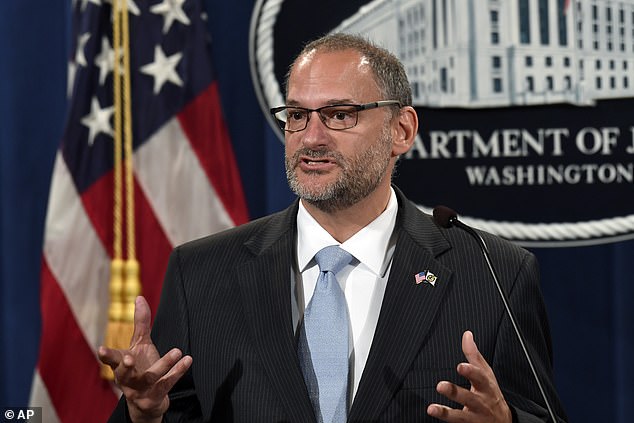 The acting director of the federal Bureau of Prisons has been removed from his position more than a week after millionaire financier Jeffrey Epstein took his own life while in federal custody.

No reason was given for the reassignment, but the move comes as the bureau faces increased scrutiny after Epstein’s suicide August 10 at a New York jail.

Hurwitz will now return to his role as Assistant Director of...

NEWS
Justice Dept. winds down Clinton-related inquiry once championed by Trump. It found nothing of consequence.
Washington Post

Justice Dept. winds down Clinton-related inquiry once championed by Trump. It found nothing of...

A Justice Department inquiry launched more than two years ago to mollify conservatives clamoring for more investigations of Hillary Clinton has effectively...

Rate Bias
Justice Department
Michael Flynn should get up to 6 months in jail for lying to FBI, prosecutors say

The Justice Department asked a federal court of appeals on Friday to reconsider a case where President Donald Trump was told he couldn't legally block Twitter...

Washington (CNN)A Department of Justice office sent its employees, including immigration judges, a daily news briefing that included a link to a blog featuring...

WASHINGTON–Federal prosecutors recommended Tuesday that former national security adviser Michael Flynn serve up to six months in prison for lying to the FBI...

In early November, during the impeachment inquiry against him, President Donald Trump threw a celebration in the East Room of the White House. The guests: a...

The analysis of the report by Justice Department Inspector General Michael Horowitz greatly depends, as is often the case, on which cable news channel you...

Derrick Walker was 13 years into a mandatory life sentence for crack cocaine possession when his case manager summoned him a few months ago to deliver the news...

DOJ seeks up to six-month prison sentence for Michael Flynn

In a reversal, the Justice Department has recommended up to six months of prison time for ex-national security adviser Michael Flynn—claiming he has refused to...

A long-awaited watchdog report from the Justice Department's inspector general on the origins of the special counsel Robert Mueller's probe found no evidence...

The Wait Is Over: DOJ Inspector General Report On Alleged Obama-Era FISA Abuses Against Trump Team...

Well, the day has arrived. The long-awaited report from Michael Horowitz, the Department of Justice’s inspector general, on the alleged FISA abuses that...

Americans nowadays have a plethora of options to stream movies online, and many may not recall the last time they viewed a film in a theater. So credit to the...

Naturalized U.S. citizen Edward Peng, 56, is accused of going to hotels to pick up items left for him by a someone within the U.S. government. When he arrived...