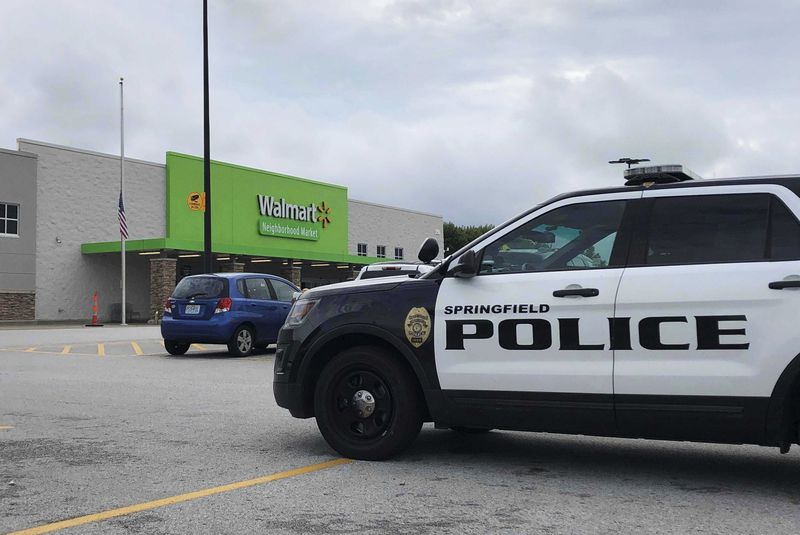 Police in Springfield, Missouri, said they arrested a man who showed up at a Walmart store carrying a rifle and wearing body armor, terrifying shoppers who fled from the store.

Springfield police posted on Facebook that "an armed individual" was arrested Thursday. No shots were fired.

HEADLINE ROUNDUP
FBI Links Pensacola Military Base Shooter to Al-Qaida
NEWS
Who was Breonna Taylor? What to know about the Louisville ER tech shot and killed by police
The Courier-Journal

Go ad-free!   About these ads
More news about Violence in America
https://www.chicagotribune.com/nation-world/ct-nw-walmart-missouri-armed-man-arrested-20190809-td45rfeuhfejdlnxxfjv4hbbvu-story.html

Who was Breonna Taylor? What to know about the Louisville ER tech shot and killed by police

LOUISVILLE, Ky. — Criticism of Louisville Metro Police is mounting as national attention turns to the March shooting death of Breonna Taylor, a 26-year-old...

The governor of Kentucky says state and federal investigators should become involved with the fatal police shooting case of Breonna Taylor, who was killed...

The murder of Ahmaud Arbery — and our continuing terror
OPINION

Today there is a national outcry about the murder of Ahmaud Arbery. The public condemnation has forced a belated response. Those accused of his murder...

Breonna Taylor: Family Of A Louisville Woman Mistakenly Killed By Police Wants To Be Sure Her Story...

The family of a Louisville, Kentucky woman who was killed by police is speaking out and looking for answers. It has been more than two months since Breonna...

Why is Georgia only now seeking justice for Ahmaud Arbery? We know the terrible answers.
OPINION

WHAT IF Ahmaud Arbery had been white? What if the two men who confronted Mr. Arbery before one of them shot and killed him had been black? What if the graphic...

Racism In The US: Anti-Semitic Incidents Surge Amid Extremist Rhetoric

More than 2,000 anti-Semitic incidents were reported across the United States in 2019, including violent acts that killed five people, the Anti-Defamation...

Shooting death of Ahmaud Arbery in Georgia: What we know about the video, grand jury and arrests

A grand jury will decide if criminal charges are warranted in the death of a black man who was shot after he was chased by two armed white men who later told...

5 dead, including officer and gunman, in Missouri shooting

SPRINGFIELD, Mo. (AP) — Five people including a police officer and a gunman have died in a shooting at a Missouri gas station after the gunman went inside and...

Former U.S. Attorney: Video Of Ahmaud Arbery In Construction Site ‘Has No Bearing Whatsoever’ On...

Over the weekend, defenders of Gregory and Travis McMichael seized on surveillance cam footage reportedly showing Ahmaud Arbery walking through a construction...

The white Georgia man who, along with his son, is charged with murdering unarmed black jogger Ahmaud Arbery had a past connection to the victim — he...

The case of a black man in Georgia who was fatally shot in February after being pursued by two armed white men is gaining widespread attention among lawmakers...

A New Hampshire mother says her son is “traumatized” after a man apparently “triggered” by the 15-year-old’s “Make America Great Again” hat slapped him across...

The man who allegedly drove his van through a Republican voter registration tent in Florida did so because he dislikes President Donald Trump, according to a...