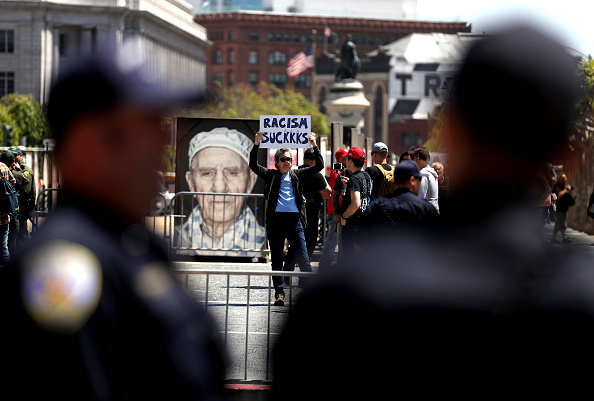 Police in Portland, Oregon, have advised groups protesting in their city to disperse after things got unruly on the streets Saturday afternoon. Protests and counterdemonstrations were taking place at three different locations.

Portland police said the scenes had become a "civil disturbance and unlawful assembly," and asked all folks in the area to leave immediately.

Those advertised to be among the demonstrators Saturday included two right-wing groups — the street-fighting fraternal group called Proud Boys, and Haley Adams of the "HimToo Movement." The Rose City Antifa planned a counterdemonstration.

NEWS
Owners Of CNN, NBC, Other Major Legacy Outlets Come Together In Support Of Fox News Amid Lawsuit
The Daily Caller

MSNBC’s Mika Brzezinski has announced that a meeting is in the works between her and Twitter CEO Jack Dorsey about President Donald Trump’s tweets. For the...

Last Thursday, Justice Clarence Thomas suggested that a major First Amendment doctrine should be abandoned, and that the right to free speech be significantly...

The right-wing anti-lockdown protests breaking out around the U.S. are presenting the latest no-win quandary for Facebook, as the world's largest social...

The case for free speech at work

Can you really lose your job for posting an opinion on Twitter, or even for clicking “like” on somebody else’s message? Surprising though it may be to...

WASHINGTON—A federal prohibition on robocalls to mobile phones looked safe after Supreme Court arguments Wednesday, as justices pushed back on claims that the...

Facebook on Wednesday announced the first 20 members of its Oversight Board, an independent body that can overturn the company’s own content moderation...

Internet Speech Will Never Go Back to Normal
OPINION

Covid-19 has emboldened American tech platforms to emerge from their defensive crouch. Before the pandemic, they were targets of public outrage over life under...

Rate Bias
Free Speech
Don't let free speech be a casualty of coronavirus. We need it more than ever
OPINION

In times of crisis, liberal democratic institutions and values are vulnerable to authoritarian power grabs, or corona coups, as we are seeing around the world...

By the time the Class of 2020 started its freshman year in the fall of 2016, the Chicago Principles of Free Expression were emerging as a lodestar for higher...

YouTube removed a video of a prominent epidemiologist explaining his view that achieving “herd immunity” is the best way to combat the ongoing coronavirus...

As colleges go, so goes the nation. A new report on student views of free speech released this month should therefore give Americans some cause for concern...

YouTube has been removing videos of a press briefing in which two doctors criticize the sweeping “shelter-at-home” edicts that governments have imposed...

Conservative firebrand and BLEXIT founder Candace Owens was suspended from Twitter on Saturday after tweeting that people in Michigan should open their...