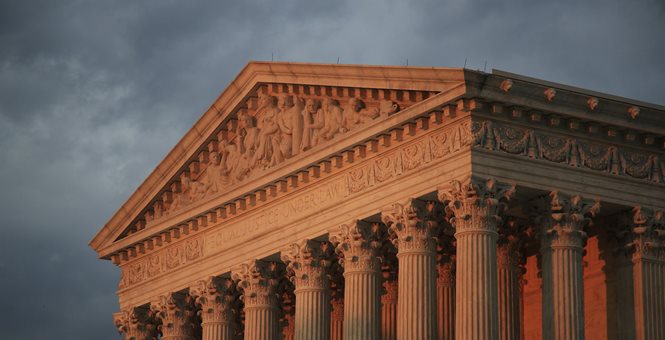 The Supreme Court has ruled 5-4 on Thursday that they are leaving the issue of partisan gerrymandering at the state level.

Part of the issue considered by the justices was whether Maryland state Democrats drew unconstitutional boundaries with sinister goals.

In her dissent, Justice Elena Kagan argued that majority was "tragically wrong."...

Expanding the Supreme Court, an increasingly popular reform among some progressive activists, is not politically costly for Democrats, according to an academic...

One possible version: What if the Court had 188 justices? Sen. Bernie Sanders (I-VT) came out against court-packing as a way to end Republican dominance of...

What if we have to destroy the judiciary in order to save democracy? At a campaign stop in Iowa, Democratic presidential candidate Tom Steyer embraced a...

Law Professor Jonathan Turley, who was called before Congress this week by Republicans, argues that Donald Trump should not be impeached for using the courts...

President Trump asked the Supreme Court on Thursday to stop a prosecutor’s investigation of his personal finances, a bold assertion of presidential power that...

At Impeachment Trial, Chief Justice Roberts May Have More Prestige Than Power

When the Senate impeachment trial of President Trump opens, the man in the center chair will be Chief Justice John Roberts. His role is spelled out in the...

Supreme Court Chief Justice John Roberts has made a point of defending the independence and impartiality of the nation’s highest court. That stand will be...

Chief Justice John Roberts has tried to prevent the Supreme Court from being seen as just another political body, but when he presides over President Trump’s...

Guns: when and how to regulate them. It's one of the biggest issues across the country. But the U.S. Supreme Court has rarely weighed in on the issue. In...

It’s Time for Term Limits on the Supreme Court
OPINION

They have broad bipartisan support, and they might reduce the hysteria of nomination battles. Murmurs of concern swept through Washington, D.C., Friday night...

When President Obama unilaterally changed immigration policy after repeatedly and correctly insisting that he lacked the constitutional power to do it, he said...