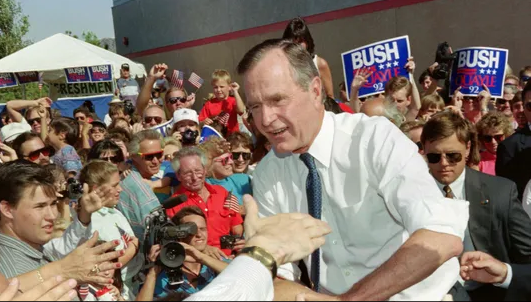 Early in George H.W. Bush’s political career, when he was running for a U.S. Senate seat in Texas, he came out against the landmark Civil Rights Act of 1964, deriding his opponent as “radical” for supporting the bill that ended segregation in public places and banned employment discrimination.

NEWS
Privacy Is Over. We Must Fight Harder Than Ever To Protect Our Civil Liberties.
Reason

The Justice Department on Monday declined to file federal civil rights charges against the NYPD officer involved in the chokehold death of Eric Garner, whose...

A week after a self-described supporter of President Donald Trump called the police on a black state senator in New York who was campaigning on the street, the...

Joe Biden is getting flak for his stance on busing. But segregated schools aren’t the root cause of educational inequity, and integration alone isn’t enough to...

Kerry Starchuk’s activism begins with homemade granola cookies – specifically, when she took a plate to her new neighbors. Except the man and a toddler boy...

The United States Senate has unanimously approved a bill to make lynching a federal crime in the country. Three black senators introduced the bill in June to...

Rate Bias
Civil Rights
Martin Luther King: Are there too many white politicians?

"Give us the ballot," said Dr King, "and we will fill our legislative halls with men of goodwill". Half a century after his death, Reality Check looks at how...

The decision to not prosecute NYPD Officer Daniel Pantaleo in Eric Garner’s death was ultimately made by Attorney General William Barr himself — because of “...

The failures of busing were widely recognized even on the left not too long ago. In 2014 Slate ran a multi-part series about how liberals’ “embrace of busing...

OPINION: Facial Recognition Tech Straight Out of 'Robocop' Could Be a Real Threat to...
OPINION

As governments and law enforcement agencies rush to incorporate facial recognition tech, California lawmakers have a chance to slam on the brakes. Nearly a...