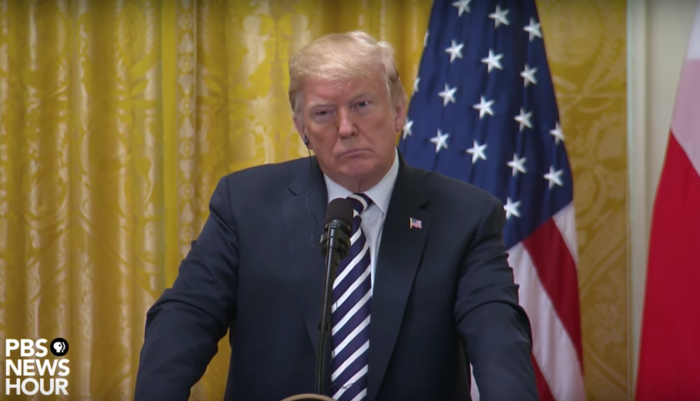 President Donald Trump says he feels “terribly” for Supreme Court nominee Brett Kavanaugh as he faces a decades-old accusation of sexual assault. Trump says the judge “is not a man that deserves this.”

Trump spoke Tuesday at a joint press conference with the president of Poland. He praised Kavanaugh, saying he was “at a level that we rarely see,” but said he supported a review process in the Senate.

Supreme Court Justice Brett Kavanaugh urged his colleagues in a series of private memos this spring to consider avoiding decisions in major disputes over...

Why did liberals win so many cases before a conservative Supreme Court?
ANALYSIS

Last October, when the Supreme Court began its term, liberals had good reason to be despondent. The Court’s most recent term, which ended Thursday, was the...

In a Term Full of Major Cases, the Supreme Court Tacked to the Center
ANALYSIS

WASHINGTON — In an era of stark partisan polarization, Chief Justice John G. Roberts Jr. steered the Supreme Court toward the middle, doling out victories to...

Senate Republicans are conflicted about what to do if a Supreme Court seat becomes vacant during the remainder of President Trump's first term, a possibility...

Supreme Court Justice Brett Kavanaugh wrote a series of memos to his colleagues on the nation’s highest court urging them not to take up recent cases on...

In Oklahoma tribal decision, ‘rule of the strong’ falls to rule of law
ANALYSIS

When he started to read the latest landmark American Indian law ruling from the U.S. Supreme Court, Joel Williams needed a few minutes just to get past the...

The U.S. Supreme Court cleared lower courts to move ahead in a clash over a grand jury subpoena for President Donald Trump’s financial records, formally...

The Supreme Court said Friday that President Trump can continue to build the border wall even as legal challenges work their way through lower courts,...

A look into the post-RBG world of American politics
OPINION

Supreme Court Justice Ruth Bader Ginsburg is in the hospital — again. The 87-year-old has overcome many health concerns while sitting on the SCOTUS, but an...

Gorsuch and Kavanaugh Stake Out Their Independence from Trump
ANALYSIS

Neil Gorsuch and Brett Kavanaugh, perhaps more than any other Supreme Court justices in modern history, are closely connected to the president who appointed...

The Supreme Court ruled Thursday a New York district attorney can obtain President Trump’s financial documents in a criminal probe. The ruling was 7-2....