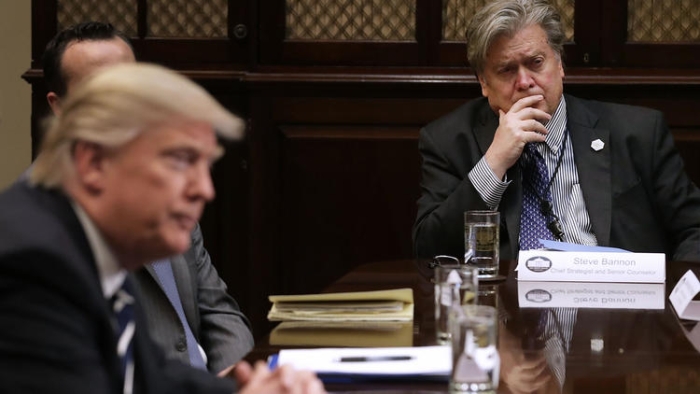 The acrimony surrounding former White House adviser Steve Bannon's very public break with President Donald Trump has escalated, suggesting a permanent split between the president and the pugilistic strategist who helped put him in the Oval Office. The new fissure in an already fractious Republican Party cast doubt on Bannon's hopes to foment a movement centered on "Trumpism without Trump."

What's worse: no presidential debate at all or separate and unequal events staged at exactly the same time with a media outlet putting both thumbs on the scale...

Rudy Giuliani spent the spring of 2019 peddling a sordid tale on behalf of his client President Donald Trump about former Vice President Joe Biden in an effort...

The Constitution mandates that everyone be counted in the 2020 census. Trump has stood in the way. County Judge Lina Hidalgo, the chief executive of Harris...

Democratic presidential nominee Joe Biden and Senate Minority Leader Charles Schumer (D-N.Y.) got a glimpse of what's in store for them if there's a blue sweep...

Hunter Biden introduced his father, then-Vice President Joe Biden, to a top executive at a Ukrainian energy firm less than a year before the elder Biden...

A lawyer for President Trump's personal attorney, Rudy Giuliani, told Fox News on Wednesday he has obtained a hard drive containing some 40,000 emails,...