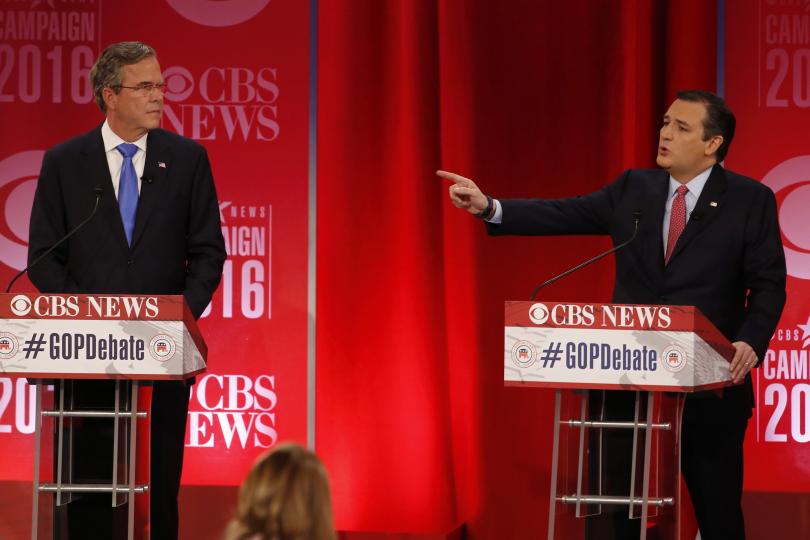 Former Florida Gov. Jeb Bush, who suspended his presidential bid in February after several primary losses, endorsed Wednesday morning Texas Sen. Ted Cruz Wednesday, a man he had criticized frequently while still in the running. Cruz isn’t the only remaining candidate Bush could have endorsed, of course, but what is striking is that Bush seems much closer aligned with the politics of the alternative hopeful, Ohio Gov. John Kasich, and there hasn’t exactly been love between the Bush family and the Texas senator.

Is Bernie cruising to the nomination? And is it too late for anyone to stop him?

Unless something happens to change the current trajectory, the senator from Vermont looks on track to become the Democratic nominee. He benefits from a divided...

Democrats who were initially skeptical of the prospects for a brokered convention now see it as a likelier scenario with eight candidates still battling it out...

6 Takeaways From The Nevada Democratic Debate

In Las Vegas — a city known for prize fights — the Democrats were gloves-off. And there was a new entrant in the ring, who took a lot of incoming: Former...

In a punchy debate worthy of Las Vegas, billionaire Michael Bloomberg came under attack from all sides. The field of candidates for the Democratic Party's...

In TV Mentions, Bloomberg Surges to the Fore

Three months ago, Michael Bloomberg was the ninth most mentioned Democratic presidential candidate despite having just entered the race, Joe Biden had more...

Rate Bias
Elections
Andrew Yang Joins CNN, So They Will Finally Ask Him Some Questions
OPINION

Rate Bias
Elections
At Democratic debate in Las Vegas, expect a battle between Bloomberg and other candidates
OPINION

Riding a wave of several hundred million dollars worth of advertising – and despite the onslaught of negative information about his opinions on race, stop-and-...

Former New York City Mayor Michael Bloomberg will appear in a Democratic presidential debate for the first time when the candidates take the stage in Las Vegas...