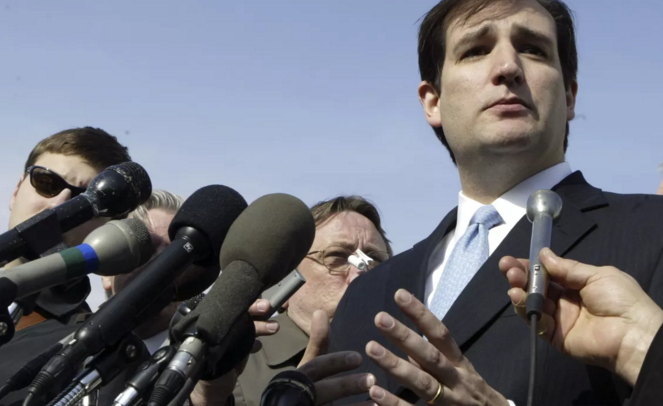 Ted Cruz would represent a lot of firsts should he be elected president: He'd be the first Hispanic president, and the first president to be born in Canada (or anywhere outside the 50 states, for that matter). But he'd also be the first president ever to have clerked for the Supreme Court. And Cruz has cited his subsequent record before the court, where he has presented oral arguments nine times (eight as solicitor general of Texas), as an important credentia

NEWS
California shuts down death row. Signs a red state may be next.
Christian Science Monitor

The Vatican announced on Thursday that the pontiff revised the Catechism of the Catholic Church, the church’s written summarization of its teachings, to...

The state of Arkansas killed Ledell Lee Thursday, just hours after a flurry of court activity cleared the way for his execution, in what could be the first of...

Less than a month before the New Hampshire primary in 1992, Bill Clinton left the campaign trail and tended to a pressing matter. Rickey Ray Rector, a...

The lead prosecutor in the Colorado movie massacre trial tore into the state's governor at a news conference, calling him arrogant and weak for giving the mass...

Nebraska's conservative legislators "argued that the death penalty is a wasteful and ineffective government program that costs too much and accomplishes too...

California shuts down death row. Signs a red state may be next.

As with criminal justice reform, the death penalty may be a growing area of bipartisan agreement among lawmakers. So far this year, Republicans in Kentucky,...

California shuts down death row. Signs a red state may be next.

California Gov. Gavin Newsom surprised Democrats and Republicans alike this week by announcing a halt to executions in the state with the country’s largest...

California Governor Gavin Newsom is due to announce a moratorium on executions and a temporary reprieve for all 737 inmates on death row in the state. US...

Pope Francis changed the Catholic Church's stance on the death penalty in a new policy published Thursday, saying it is “inadmissible” because it “attacks” the...

President Donald Trump spelled out in new detail several steps he favors to fight a U.S. epidemic of opioid abuse, including the execution of drug dealers, a...

This is not jurisprudence but jurispretext. The headlines say the justices of the Supreme Court are “openly feuding” and “sniping” at one another over the...

Gavin Newsom, the newly inaugurated governor of California, would very much like to be president of the United States someday. It is fitting, then, that Newsom...

The Holy Father’s teaching on the death penalty is a development, not a contradiction, because it adapts the same principles of the faith to new situations.

Pope Francis is steering the Catholic church away from supporting the death penalty in a new papal policy released Thursday.

Speaking from one of the states hardest hit by the opioid epidemic, President Trump on Monday laid out a battle plan that calls for harsher sentences - and...