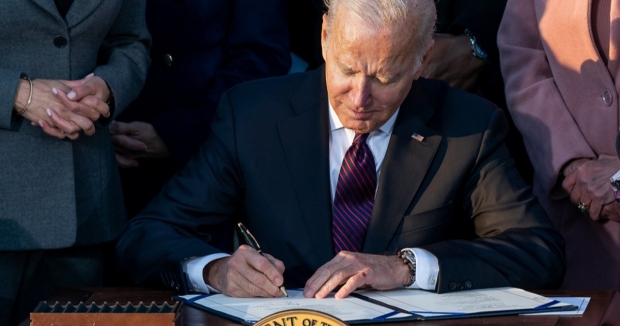 Answer: your guess is as good as mine.

To be fair, presidents almost never have complete control over their agendas: there are always unexpected crises that can undermine even the most carefully crafted of political strategies. Biden didn’t ask for a Covid resurgence, or festering problems on the international front with Russia or China, or persistently stubborn inflation. These are challenges that found their way to Biden rather than battles he has sought. But each detracts from the message he tries to deliver to the American people and shrink the window of opportunity through which he can deliver it.

The tempting answer is to point to the president’s Building Back Better legislation, the social spending and climate change package over which the White House has labored for the past several months. But even that choice avoids a real answer as to Biden’s most important goal, since the bill includes a smorgasbord of health care, child care, senior care, education, housing, climate and other government programs. As Biden faces increasing pressure from centrist Democrats to reduce the bill’s overall cost, he will be forced to decide which of those many policy alternatives stay as part of his proposal and which will fall by the wayside.

Biden further complicated matters for himself at the end of 2021 when he began suggesting that voting reform has risen to a higher level of import for him as well. Party progressives have become restless as they watch the president’s social spending legislation get gradually smaller, and they are beginning to make more noise about the need for some of their other political objectives. Heading into a critical midterm election year, Biden needs a motivated base if he has any hope of maintaining Democratic congressional majorities, and what appears to be a lack of enthusiasm for the president’s economic goals may be steering him in the direction of voting reform instead as an alternative method of revving up his party’s grassroots loyalists.

Biden’s most ambitious allies will argue that he can and should do both Build Back Better and voting reform. But even less embattled presidents with much larger reservoirs of political capital can only communicate so many objectives to the voters at once, and the continued pandemic will make it even more difficult for the White House to be heard on multiple fronts. The more Biden talks about one goal, the less he talks about the other. The more he emphasizes one, the less likely he is to accomplish the other.

This difficult choice doesn’t even address the multitude of other commitments he made during the campaign. There is actually legitimate potential for bipartisan agreements on police reform and immigration policy, but neither will happen without direct presidential involvement. And other Democratic constituencies still clamor for action on gun control, reproductive rights, marriage equality, student loans and a number of other fronts. That’s a lot of demands on Biden’s time, all even more challenging during an election year.

This decision could ultimately be made for Biden rather than by him. Somewhat improbably, he could be saved by his predecessor’s appointees to the U.S. Supreme Court. As the Court prepares for a landmark decision on abortion rights next summer when it rules on the constitutionality of a Mississippi case that would prohibit legal abortions after 15 weeks of pregnancy.

If the Court decided to overturn Roe vs Wade, the preservation of legal abortion nationally would almost certainly become the central Democratic battle cry for the midterms. Biden, who is a devout Catholic and was an opponent of abortion rights earlier in his career, has never seemed entirely comfortable on this issue. But a Roe v Wade reversal would give him no options and a pro-choice message would take center stage for him through November.

But that Supreme Court decision is still months away, and there is a growing stack of legislative goals piling up at the door to the Oval Office. And it’s Biden’s responsibility to establish some clarity and to give unambiguous marching orders to his troops.

Pick your favorite cliché, but as Biden prepares for the second year of his presidency, it’s time for him to set some priorities. Because he is starting 2022 with a formidable set of domestic policy challenges and a strategy for accomplishing those multiple goals that is hazy at best.