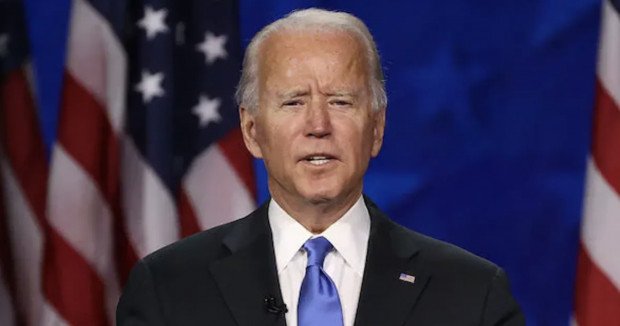 Joe Biden already faced an uphill battle when he was sworn in as president on Jan. 20, 2021.

The ongoing COVID-19 pandemic significantly disrupted the traditional American way of life, while intelligence chiefs assessed international competitors like China and Russia to be major threats to national security.

The Jan. 6 Capitol riot also rattled many Americans’ perceptions surrounding the stability of democracy, and in the months leading to Biden’s inauguration, the political divide between the two parties became so stark that some political analysts feared that a second civil war was brewing.

Political polarization, which AllSides has set out to dismantle, was one of the key components Biden pledged to fight on Day One.

"Today, on this January day, my whole soul is in this: Bringing America together. Uniting our people. And uniting our nation," Joe Biden stated during his inauguration speech.

One year later, Biden couldn’t control all of the aforementioned issues — which some voices argued were out of his control.

While most media outlets may agree that Biden faced “a series of setbacks” during his first year in office (several polls have found that his popularity has continued to diminish), they became polarized when it came to pinpointing where the 46th president went wrong.

Optimists From Across The Spectrum

A number of left-and center-rated outlets emphasized the positive achievements of the Biden administration.

“Everyone needs to take a breath: It's been one year,” wrote CNN (Left bias) senior political analyst Kirsten Powers.

While The Conversation (Lean Left bias) wrote that “drawing a negative conclusion on this busy and difficult year seems reasonable,” they emphasized a number of accomplishments “which can get lost in the media vortex,” such as the Biden administration administering nearly 500 million vaccines. The report also emphasized how the cascading unemployment rate and influx of jobs added to the economy “points to a sustained recovery.”

One major accomplishment that was praised by many voices across the spectrum was the bipartisan infrastructure bill. David Brooks (Lean Right bias) emphasized Biden’s “tremendously successful” $1.9 trillion stimulus package as one of his major accomplishments, one that he believes will “boost American productivity for years to come.”

The child tax credit expansion, a major component of Biden's American Rescue Plan, has been credited for cutting child poverty in America in half — a major accomplishment by any standard.

Many left-rated voices sensationalized how bad the times we are living through are. Politico (Lean Left bias) wrote that Biden took the oath of office at a time when “the nation faced its greatest array of crises in nearly a century.”

One opinion writer published in The Guardian (Lean Left bias) emphasized that the country was in much worse shape 12 months ago — where there was “no orderly transition” of power and senior military forces were “deeply concerned about the nuclear command chain.”

They write that when the Biden administration was sworn in, there was a “restoration of normality.” The author pointed to “the rapid rollout of vaccines,” “America rejoining the Paris climate treaty,” and Biden restoring “presidential control of the military command chain.”

On the other hand, one opinion writer for HuffPost (Left bias) pointed to a number of deep-rooted issues that Biden “can’t fix,” such as the “structural mess” of the U.S. Senate, as well as the “moral panic” and divisive reactions to “police brutality protests or critical race theory.”

NPR (Center/Lean Left bias) wrote that Biden’s first year in office feels “beleaguered” in comparison to former presidents, emphasizing that “most of the presidents elected since World War II have seen their poll numbers fall in Year One, sometimes dramatically.”

Critics From The Left and Center

There have been many progressive and moderate Democrats that have heavily criticized Biden’s first year in office.

For instance, one opinion writer from The Daily Beast (Left bias) wrote that Biden was elected to be “the opposite of Trump” but has ended up looking a lot like his predecessor as he’s “incapable of owning his failures and changing course.” Some of the failures cited included not “working across the aisle” and “questioning the legitimacy of elections.”

Building on that notion, Axios (Center bias) went as far as to say Biden “has by almost every measure bombed big time on the things that matter most” since signing the $1 trillion infrastructure bill into law. They pointed to the “baffling” COVID messaging coming from the CDC, the president’s failure to deter Russia from “continuing to build toward a Ukraine invasion,” and how inflation has reached the highest rate seen since 1982.

Newsweek (Center bias) also listed Biden’s “mismanagement at the border” and his decision to reinstate the Trump-era Remain In Mexico program as one of his “biggest failures” as president.

Many left-and center-rated outlets also suggested that Biden’s struggles could be defined by his handling of the COVID-19 pandemic. A group of reporters from The New York Times (Lean Left bias) criticized the Biden administration for being “unprepared for the sharp turns” the pandemic took as well as its “single-minded focus on vaccination as the path out of the pandemic.” They also wrote that Biden has been too cautious for not “forcing Americans to get shots.”

Despite these shortcomings, many left-rated voices critical of Biden’s presidency thus far seemed to agree that “getting at least one dose of a vaccine into nearly 85 percent of Americans 12 and older” was one of the Biden administration’s largest accomplishments.

Charles Lane (Center bias) assessed Biden’s failures in three categories: his “blunders (failing to prepare the Afghanistan pullout) to his bad luck (the omicron variant) to forces beyond his control (sheer partisan polarization).”

The Biden administration, according to Lane, “overestimated how much the public wanted a transformational Great Society 2.0 — as opposed to a restoration of stability in the economy, education and public health.” In other words, he is arguing that many Americans want nothing to do with the “new normal” that so many Democrats have pushed — but rather want to return to their old ways of living.

Some analysts, such as Lane, said Biden “shouldn’t have spent so much time trying to pass voting rights legislation when the votes simply weren’t there.” Others placed the blame on Manchin and Sinema for not supporting their own party’s initiatives.

Republicans generally agree that Biden went too far to the left, according to one writer from Roll Call (Center bias). But the criticisms didn’t stop there.

Many outlets such as The Federalist (Right) noted how Biden quickly dismissed the centrist approach that was advertised during his presidential campaign by signing a list of “radically left-wing executive orders,” including one order that required public school districts to “ignore the biological differences between male and female students from the athletic field to the bathroom if they wish to continue receiving federal funding.”

One opinion writer from the Utah-based news outlet Deseret News (Lean Right bias) emphasized how Biden was simply a “placeholder president” or “merely a way out” for many voters who wanted to get rid of Trump. This idea was big among Mormon communities in Utah, although the state ultimately ended up voting for Trump.

Emphasizing the president’s absence, outlets such as The New York Post (Lean Right bias) noted that Biden spent “at least part of 101 days of his first year in office” back in his home state of Delaware.

One opinion piece from Washington Examiner (Lean Right bias) wrote that “Biden’s first year was as bad as you thought — if not worse,” highlighting how Biden “fails on a monthly basis to communicate adequately” and “often flubs even the most basic presentations in a manner that is as excruciating as it is revealing.”

Meanwhile, National Review (Right bias) said Biden “has proven himself to be every bit the vicious partisan that his critics expected” and pursued “a preposterously ambitious agenda.”

Fox News (Right bias) attributed the drop in Biden’s approval rating to the White House’s shift in COVID-19 messaging. The article highlighted how Biden “reversed his position on vaccine mandates” and “failed to follow through on his promise to hold China accountable for its handling of the virus that causes COVID-19.”

The most obvious blunder was the Biden administration’s handling of the situation in Afghanistan — which 71% of Americans agreed that the administration did a poor (42%) or only fair (29%) job conducting. Peggy Noonan (Right bias) noted how Biden was “defiant and defensive” after the Afghanistan debacle, suggesting he should spend his second year “readjusting his positions” that were “basically understood and disliked.”

The American people are “reasonable and have proven time and again that they can forgive mistakes,” according to Neil Patel (Right bias). He suggested Biden could have started to reverse these “ominous trends” by  “leveling about his missteps and explaining how he will fix them,” but “wasted the opportunity” by continuing to “obfuscate, spin and deflect.”

As political analysts consider the nation’s toughest issues, they are pointing fingers in all different directions as to who to blame.

The “one big problem” looming over Biden’s first year in the Oval Office that voices on both sides of the political spectrum seemed to agree on is the lack of unity. To blame Biden entirely for this growing partisan divide, however, would be unfair. For instance,  Biden has been plagued by setbacks thanks to a lack of support from progressives.

Progressive Democrats have pressured Biden to pass legislation that adheres from his moderate standpoint since day one, including his proposed vaccine mandate for larger businesses that has now been blocked by the Supreme Court.

Also, Senate Minority Leader Mitch McConnell said in March — two months into Biden’s term — that he was "100 percent" focused "on stopping" Biden's administration. Despite the narrow majority of House Democrats, Republicans have been completely united in opposition to several key legislative issues proposed by Democrats — making it difficult for the Biden administration to get legislation passed.

With so many varying perspectives on hot-button topics, it’s understandable how Biden may sometimes receive criticism from both sides. The president insisted that he “didn’t overpromise” and then pointed at the Republicans in Congress who refused to work with him.

Perhaps he misunderstood the definition of unity. Sure, unity goes both ways — but Biden needs to lead by example and work on compromising with those across the aisle. And he needs to do so soon, because if the predictions for the 2022 midterm elections are any indication, that slight Democrat majority in Congress is only going to shrink.

Reflecting on his first year in office, Biden briefly lamented the polarized nature of political news. Maybe he should give AllSides a read sometime!

And you should, too. It’s easier to see a clearer picture when you’re not caught inside a filter bubble of one-sided perspectives. Use our balanced newsfeed to get multiple perspectives, and get the tools to decide for yourself what you think about the issues.