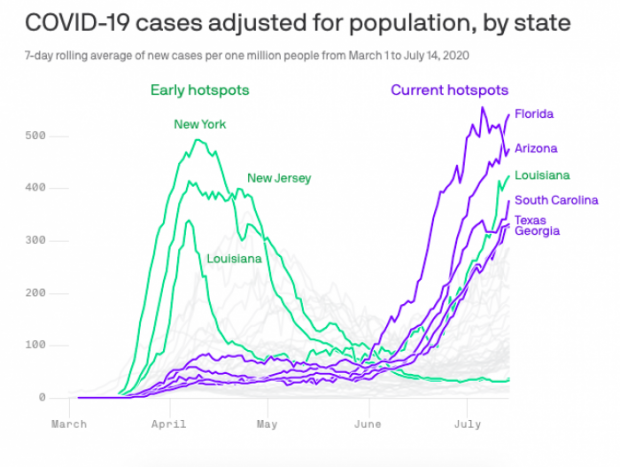 Florida set a U.S. record earlier this week with over 15,000 new COVID-19 coronavirus cases reported in a single day, solidifying itself as a North American coronavirus epicenter while other regions seem to gain more control over the virus. In especially affected areas, some hospitals are reportedly reaching capacity, while others are more open.

The rise has been mirrored in many southern states, while parts of the Northeast continue a weeks-long downward trend in new cases. The U.S. continues to lead the world with 3.5 million virus cases as of Thursday. More than 1 million in the U.S. have recovered, and over 138,000 have died.

Many left-rated voices focused on reportedly rising death rates and the nation's purported overall failures in containing the virus. Some blamed officials including President Donald Trump and Gov. Ron DeSantis (R) for purportedly enabling the spread. Some on the right argued case spikes in Florida and elsewhere could be attributed to backlogged databases of previously unreported test results all being resolved at once; others criticized the left for purportedly moving the goalposts to focus on new cases instead of flattening the rate of hospitalizations.

Florida's situation remains a hot topic on all sides. Reports from each side foreshadowed the Republican National Convention scheduled for next month in Jacksonville.

On the Blog: We spotted a few stories worthy of a Media Bias Alert this week: the media's coverage of Kanye West's presidential bid; Fox cropping Trump out of a photo with Jeffrey Epstein and Ghislaine Maxwell; and a Texas newspaper leveling with readers after reprinting a biased Associated Press story.

Florida coronavirus numbers may not be as bad as they seem

"...The sharp uptick in positive cases was very likely the result of Florida’s massive testing backlog. A report by the Tampa Bay Times found that half of the new cases the state reported last week were linked to tests performed by one company: GENETWORx...It seems GENETWORx released all of its delayed results on one day, which helps explain Florida’s massive one-day spike. Florida is certainly not out of the clear. For one reason or the other, case numbers are increasing, and it’s important that the state’s residents take this outbreak seriously. But we should also remain skeptical of the data. There are many factors that contribute to the spike Florida is experiencing, and a complete report isn’t possible without taking them all into consideration."

"Dr. Charles Lockwood, dean of the University of South Florda's College of Medicine, told "The Ingraham Angle" Tuesday that "it's pretty clear" that the state's current increase in confirmed coronavirus cases doesn't come close to the catastrophic effect of the virus on New York and New Jersey. "We are picking up asymptomatic cases, [and] picking up milder cases than we did before," Lockwood said. "When you test this number of people, thousands and thousands -- really, if you think about it, we are approaching one percent of the population in Florida being tested every day."

""A FOX 35 investigation released on Monday discovered an inflation of coronavirus cases by the Florida Department of Health. The Sunshine State’s health authorities misreported the number of persons testing positive for coronavirus in its aggregation and publication of test results from laboratories. FOX 35 anchor Charles Billi explained the impetus for the investigation. He said, “We found numerous labs that are only reporting positive test results, so they show a 100-percent positivity rate. That got our attention."

'From worst to first': These states have tamed coronavirus, even after reopening. Here's how they're doing it, and why they can't let up

"When Covid-19 suddenly ravaged New York, hospitals looked "apocalyptic." Now, the rates of infection, hospitalizations or deaths have plummeted in New York and several other states -- paving the way for full economic reopenings. It's the opposite of what's happening in most of the US, where the virus is surging and more than half the states have paused or backtracked their reopenings. Here's how some states have helped get coronavirus under control -- and what they're doing to make sure it stays that way."

Former COVID-19 data chief: Outbreak is "much worse" than DeSantis administration lets on in Florida

"Rebekah Jones, the Florida data scientist who in May claimed that she was fired for refusing to manipulate state coronavirus data to meet the Republican governor's reopening criteria, has issued a new warning: The ongoing outbreak is "much, much worse" than it has been painted by the administration. In a Monday interview with MSNBC host Lawrence O'Donnell, Jones, who built the state government's coronavirus data portal, identified a number of failures since she left her state job. Florida recently posted the highest daily caseload in a single day across all 50 U.S. states."

"Florida surpassed 300,000 confirmed cases of the coronavirus on Wednesday, according to data collected by Johns Hopkins University...Health officials reported an additional 10,181 new confirmed cases Wednesday. Florida took more than three months to reach 100,000 coronavirus cases but then took just two weeks to jump from 100,000 to 200,000. Florida Governor Ron DeSantis in a news conference Wednesday said the state is doing roughly 90,000 tests per day but said the results were taking too long to process."

Florida's coronavirus outbreak is getting worse

"Of the 20 U.S. metro areas with the highest daily case growth, nine are in Florida, according to Nephron Research...The state health department announced 132 new deaths yesterday, the most the state has seen since the pandemic began...Deaths lag several weeks behind new cases, and cases are skyrocketing.

"Florida health officials have identified a troubling trend; approximately 31 percent, or one-third, of children in Florida tested for COVID-19 yield positive results, according to the Sun Sentinel. State data indicates that out of 54,022 Florida children tested, 31.1 percent have returned positive results on average. This is higher than the statewide positivity rate, which reads in at about 11 percent."

Hospitals in Covid-19 Hot Spots Are Filling Up

"As the pandemic pushes U.S. hospitals in the South and West near capacity, the urgent need for available beds has stranded patients in emergency rooms, scrambled ambulances and forced patients to relocate hundreds of miles to relieve overcrowded wards. In Arizona, hospitals are using a statewide transfer center to move 30 to 50 patients between hospitals each day, according to the director of the state’s Department of Health Services."