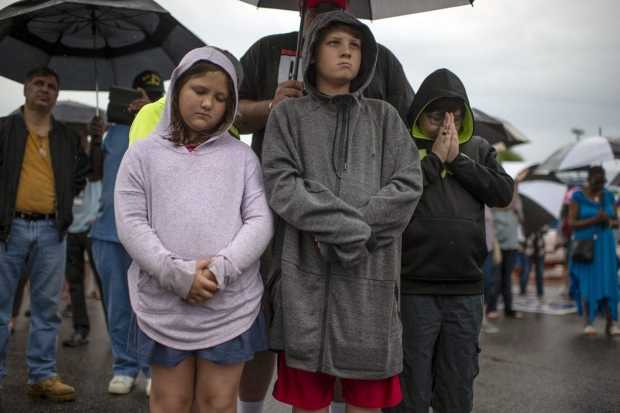 Twelve people were killed and four injured on Friday in a mass shooting at a government building in Virginia Beach, Virginia.
The spree reinvigorated the debate around firearm ownership, with a particular focus on gun silencers, which the shooter used to carry out the attack. In the wake of the tragedy, some argued for increased restrictions around gun use, while others questioned if further regulations would successfully curb gun violence.
Check out some other big stories this week: Before Tariff Deadline, Mexican Armed Forces Meet Migrants Near the Border; Trump Admin Stops Cruises to Cuba; and Judge Rejects House Democrats Lawsuit Trying To Block Trump's Border Wall Funding.
From the Blog: A new audit conducted by the Computational Journalism Lab at Northwestern University reports that Google is biased toward a small number of major media outlets — and the majority of them have the same AllSides Media Bias Rating.

The Virginia Beach shooting confirms that gun violence is a national emergency
Washington Post Editorial Board
"The Virginia Beach shooter put a sound suppressor on his .45-caliber semiautomatic pistol so that the death shots were muffled, perhaps denying others the warning that would have allowed them to escape. It is long past time to remove the silencer that seems to suppress action on gun-control legislation, to treat mass shooting as the epidemic it is, and do everything possible to save lives.'"
Fewer guns mean fewer killings, and we all know it
CNN Opinion
"The NRA and other 'gun rights' proponents claim that if guns are restricted, only outlaws and bad guys will have guns. But if it were harder to buy guns, they would also stay out of the hands of irresponsible men and women, whose negligent treatment of their weapons results in a great number of deaths and injuries every year, many of which involve children. Many criminals, too, aren't the plotting masterminds we imagine them to be. A tougher road to gun ownership would mean that impetuous gun crimes, or crimes of passion, would simply be less likely to happen.'"
NRA's shameless new grift: Pushing silencers like the one the Virginia Beach shooter used
Salon
"After the Virginia Beach shooting, the discussion regarding silencers will likely be dominated by impossible-to-settle debates about how much impact the silencer had on this particular day of carnage. Those debates distract from the much larger issue, which is that the NRA and the gun industry it supports don't really care about any such questions as long as they're making money. It's high time that people whose only interest is profit, not in saving lives, should be denied any voice in determining how guns are regulated."

What Gun Control Advocates Fail to Grasp After Mass Shootings
Townhall Opinion
"The chilling fact is that mass public killers are attracted to targets where people can’t defend themselves. The Virginia Beach attack is all too familiar. Ninety-eight percent of US mass public shootings since 1950 have occurred in places where people weren’t allowed to defend themselves. But the news media refuses to cover this fact, which illustrates the need for self-defense, not for more gun control that doesn't work."
Cory Booker knows the truth about gun violence -- but sadly, he can’t say it
Fox News Opinion
"Booker just continued to evade the question. Part of the reason for the obvious dodge was that none of Booker’s (or other Democrat’s) proposals would have stopped this murderer, as the killer’s handguns had been purchased legally and there is no red flag, at least that’s now publicly known, that would have put this man on law enforcement’s or public health official’s radars.”
Mass Shooting Delusions
Reason
"So-called silencers, a.k.a. suppressors, do not eliminate 'the sound of gunfire.' On average, they reduce the noise generated by a .45 ACP pistol (the kind used in Friday's attack) from around 157 decibels to something like 127 decibels, which is still louder than a siren or a thunderclap. It's not surprising, then, that "most law enforcement experts say" the Virginia Beach shooter's suppressor "likely had no bearing on his ability to kill so many people in so little time," as the Associated Press noted."

Virginia Beach shooting: 12 killed after city worker opens fire at colleagues
BBC News
"The attack began shortly after 16:00 (20:00 GMT), at Virginia Beach Municipal Center, in an area which is home to a number of city government buildings. The area was put into lockdown by police and employees were evacuated.
'We just heard people yelling and screaming at people to get down,' Megan Banton, an administrative assistant in the building, told local television news station WAVY."
Trump Expresses Concern About Gun Silencers in Wake of Virginia Shooting
Wall Street Journal
"Critics of silencers argue they make it harder for law enforcement and others to detect gunfire. The firearms industry says silencers protect the hearing of gun owners and soften the recoil on guns."
Suspected Virginia Beach shooter used a gun suppressor. Did it make Friday's shooting deadlier?
USA TODAY
"While a suppressor muffles the sound of gunfire, gun rights advocates and law enforcement experts said the use of one likely did not determine the deadliness of Friday's shooting but could be a sign that the suspect carefully planned the attack.
...
It’s not immediately clear how long Friday’s attack lasted, or how much time passed before the first police officers arrived on scene. But some gun control advocates say the suppressor may have caught the victims off guard. One survivor described hearing something that sounded like a nail gun."
Discover more on this topic on AllSides.
Tags:
Gun Control and Gun Rights
Virginia Beach shooting
NRA
Story of the Week
News