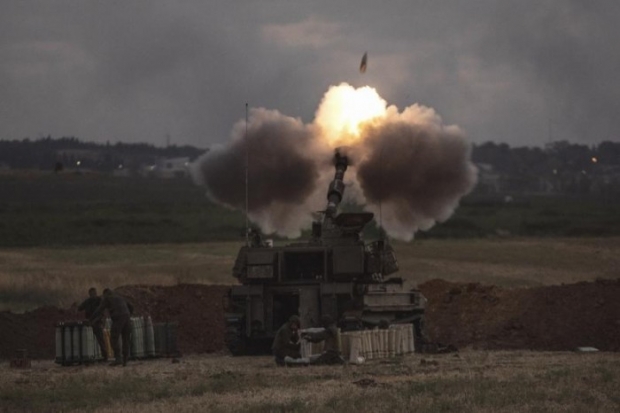 The violence between Israel and Hamas militants continued this week as the two trade rocket attacks and airstrikes along the Gaza Strip. Israeli Prime Minister Benjamin Netanyahu said he is "determined to continue" operations in Gaza despite a phone call from President Joe Biden Wednesday in which Biden told him he “expected a significant de-escalation today on the path to a cease-fire." Biden and Netanyahu spoke four times in the past week, with Biden expressing his support for Israel’s right to self-defense while voicing concern over the bombing of journalists’ offices. As of Wednesday afternoon, at least 12 Israelis and 227 Palestinians had been killed in the violence.

The ongoing conflict received coverage across the political spectrum. Many on the right tend to frame Hamas as terrorists; left-rated outlets tended to use the words "militant group." Voices from the left also tend to focus on the disproportionate number of Palestinians killed, connecting that fact to Gaza's population density and Israel's advanced Iron Dome rocket defense system. Reports from some right-rated sources focused more on alleged atrocities committed by Hamas, such as the use of human shields. Some right-rated voices also accused some left-rated media outlets of exhibiting a pro-Palestine bias; coverage from right-rated sources tends to frame Israel in a more favorable light than coverage from left- and center-sources.

"The firing of hundreds of imprecise rockets into Israel by Hamas and other Palestinian groups is fairly clear-cut. International law prohibits targeting civilians or using indiscriminate force in civilian areas. Rockets slamming into Tel Aviv apartment blocks is a clear violation. But in Gaza, where 2 million people are packed into a narrow coastal strip, the situation is far murkier. Both sides operate in dense, urban terrain because that’s pretty much all there is. Because of the tight space and intense bombardments, there are few safe places for Gazans to go."

"Saying the Biden administration’s Middle East policy has been less clueless than what came before is clearing a low bar. But diplomats in the region view the United States’ diplomacy during the latest conflict in Gaza as feckless, saying the administration’s role—while 'supportive'—has been 'minimal.'"

"The Biden administration says a two-state solution is 'the only way to have a long-term outcome that’s peaceful and lasting,' but Bush told Fox News that remedy will be a challenge. 'I think it's very difficult at this stage,' Bush said. 'I wish, obviously, all of us should hope there's not violence, but what I think you're seeing playing out is Iranian influence targeted toward Israel, and trying to break up alliances that were formed in the previous administration called the Abraham Accords.'"

"In an effort to portray Israel as 'wantonly and indiscriminately slaughtering civilians' — feeding into the prevailing narrative of anti-Semites across the world — the AP failed to properly identify sources and causes of death, it used partial and misleading quotes, and it relied on posed photos and Palestinian disinformation."

U.S. pressure fuels hope for Israel-Gaza ceasefire, but as both sides stay on the attack, kids suffer the most
CBS News

"The misery in Gaza has been unrelenting. Israeli airstrikes have illuminated the skyline for 11 days, causing an inferno of destruction on the ground. The Gaza Health Ministry said on Thursday that the death toll from the bombing campaign had hit 230, with 65 children among the dead."

"From a leader who recently looked on the verge of removal from office (and possibly jailtime given the wide range of corruption charges he was facing), Netanyahu now looks like one with few meaningful constraints on his power. Some of the Israeli government’s recent actions, from the storming of Al-Aqsa during Ramadan to the bombing of the AP’s office in Gaza, almost have a deliberately provocative, trolling quality, as if Netanyahu is daring his critics to be outraged."