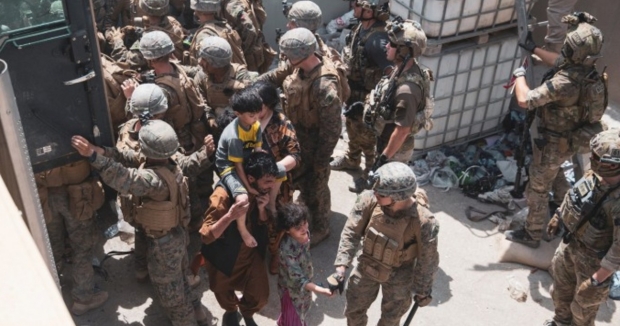 Suicide bombings at the airport in Kabul, Afghanistan Thursday killed over 100 people, including 13 U.S. service members and at least 90 Afghans. The U.S. has been working to evacuate American citizens and allies from Afghanistan as the Taliban takes power. President Joe Biden said this week that the U.S. was "on pace" to meet the Aug. 31 evacuation deadline; on Wednesday, Secretary of State Antony Blinken said there's approximately 1,500 Americans left in Afghanistan. Thousands of people are fleeing the country through the airport. The U.S. and other Western countries have evacuated about 100,000 people in the past two weeks, including roughly 4,700 U.S. citizens and their families.

The rush to evacuate Afghanistan and Thursday's attacks at the airport have been covered prominently across the spectrum. Many reports, especially from left- and center-rated outlets but also from the right, focused on evacuating Afghans who helped the U.S. military and now fear Taliban retribution. Coverage from right-rated sources often framed the Biden administration's handling of Afghanistan and the evacuations in a negative light; some voices have accused Biden of "stranding" Americans and allies who remain in the country.

"Focusing on the execution of the withdrawal is giving virtually everyone who insisted we could remake Afghanistan the opportunity to obscure their failures by pretending to believe in the possibility of a graceful departure."

What final US days in Afghanistan will look like: Scaling back evacuation flights, destroying weaponry

"For civilians trying to evacuate – especially Afghan nationals – reaching the airport in the capital of Kabul has become more perilous as Taliban fighters block access roads. For those who get through Taliban checkpoints, the specter of Islamic State suicide bombers hovers over the crowds surging toward the airport."

Not ‘going to be possible’ to get all Americans out of Afghanistan, warns ex-advisor to U.S. special operations

"In the past 24 hours, Western forces evacuated 19,000 people out of Kabul on 90 military cargo aircraft flights, a cadence of one departure flight every 39 minutes, according to the Pentagon. The Biden administration has not provided the total number of Americans and Afghan nationals that it is aiming to evacuate in just six days. "

"The halting of evacuation flights comes amid intelligence warnings of an imminent risk of terrorist attacks on Kabul airport by Islamic State. The U.K. late Wednesday warned its citizens to stay away from the airport because of the risk of an attack. The Foreign Office said in official advice for travelers that people shouldn’t go to the airport and, if already there, should leave."

"At least 75% of the caucus members supported the vote to publicly urge Biden to extend the Afghanistan withdrawal date. Biden has faced criticism from both sides of the aisle over his commitment to an August 31 deadline for withdrawing American troops from the Kabul airport where thousands of Americans and allies are currently attempting to make their way to as the Taliban continues to put up roadblocks and attack those trying to escape."

"As a policy matter, of course, Biden’s botching the evacuation is a separate issue from whether the United States should be withdrawing from the country, despite continual efforts to conflate the two. And past mistakes regarding Afghanistan do not absolve the president of his administration’s astonishing incompetence."

Story of the Week, Afghanistan, Taliban, US Military