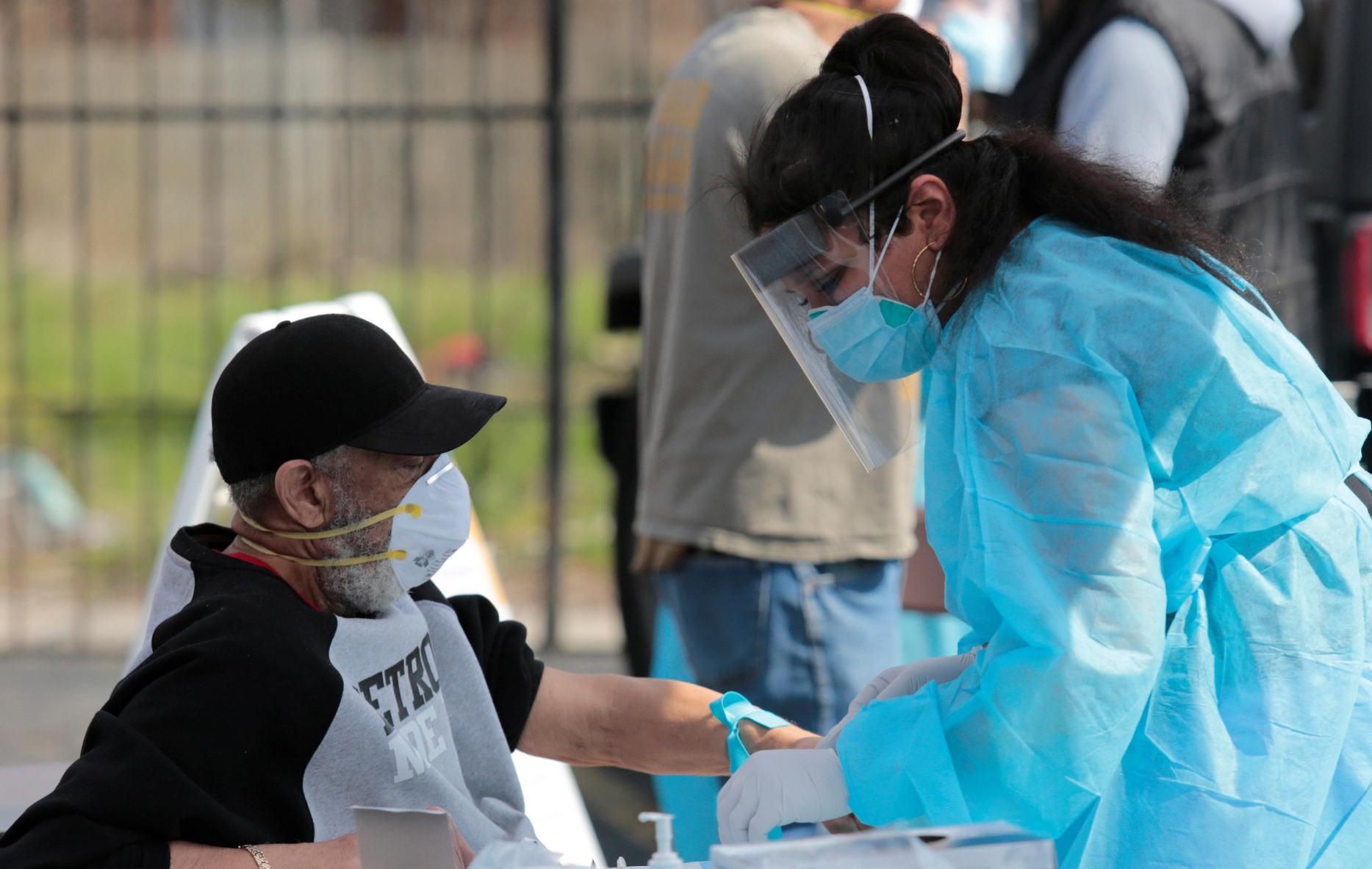 More than 1 million people in the United States have tested positive for the COVID-19 coronavirus, as the testing capacity and race to create a vaccine become the national focus.

Meanwhile, political disputes are coming to a head in some states where lockdown measures are on the verge of being relaxed; Illinois had an attempt to extend its stay-at-home order blocked by a state judge earlier this week.

The White House's stance that improved testing is the reason for the high case count has been the subject of media scrutiny. Some left-rated reporting focused on the persistent lack of testing in some regions; many on the right painted a more optimistic outlook, concentrating on apparent indications that the spread of the virus is slowing.

Make it through this pandemic with your health and sanity intact. Get the latest COVID-19 coronavirus data, balanced news, information on staying healthy and more.

"The United States had over 1 million confirmed coronavirus cases as of Tuesday, accounting for about a third of the global tally. Yet the rate of new infections and deaths has been on the decline, leading to increased urgency to ease economic restrictions and lift some stay-at-home orders."

"The true case count is likely higher than what has been reported by Johns Hopkins University so far because not enough people have been tested for the virus. Though the U.S. has ramped up testing efforts, the number of people who have received a diagnostic test is just a drop in the bucket. According to the COVID Tracking Project, nearly 5.8 million people in the U.S. have been tested for the virus — less than 2% of the population."

"The seventh week of the global coronavirus epidemic in the U.S. has come to an end. Over 1 million Americans have tested positive for the SARS-CoV-2 coronavirus infection, with 52,525 deaths as reported by the COVID Tracking Project through 28 April 2020. Those are big numbers, yet there are increasing signs the spread of COVID-19 is decelerating, though some states are still seeing growing numbers of cases."

"Starting from 22 April 2020, the volume of testing in the U.S. has kicked up into a higher gear, with anywhere from 190,000 to 314,000 tests results now being recorded per day. In the last week, the overall 'test positivity' rate of daily testing has dropped below 15% for the nation, confirming the expansion of testing beyond those suspected of having been infected by the coronavirus that originated in China."

"White House coronavirus task force member Dr. Anthony Fauci urged caution Thursday as states begin to reopen from coronavirus shutdowns, warning against “tempting a rebound” in infections by returning too soon...Governors are given “a lot of leeway” with the guidelines, but it’s necessary to adhere to their core principles moving forward, Fauci said."

"Fauci stressed the importance of 14 days of “continual diminution” in numbers of new COVID-19 cases prior to any reopening, but warned of “blips” that may occur. “When you pull back, there will be cases,” Fauci said. “And what we need to do is make sure they have in place the capability of identifying, isolating and contact-tracing individuals. If they do that, I feel cautiously optimistic.”"

"The United States has reported more than a million coronavirus infections only because of its testing, President Donald Trump said on Wednesday, hailing the effort as being “much better than any other country in the world”. The Twitter comments came amid warnings from state public health officials that shortages of trained workers and materials have limited testing capacity."

"The rise pressures efforts to boost testing capacity and health officials flagged the challenge of getting tests to those who need them most. “One of the problems has been is the tests getting to the people who need them,” U.S. infectious diseases expert and health official Anthony Fauci told CNN in an interview on Tuesday. Fauci, head of the National Institute of Allergy and Infectious Diseases, said every American in need of a virus test should be able to get one by the end of May or the beginning of June."

"Assistant Secretary of Health Adm. Brett Giroir, the official leading the federal government's coronavirus testing response, told Time Tuesday “there is absolutely no way" the U.S. will be able to conduct 5 million coronavirus tests per day, contradicting comments President Trump made at a press briefing later in the day."

"A Harvard University paper assessed that the U.S. would need to conduct 5 million tests daily by early June, and 20 million a day by late July, to reopen safely. But Giroir called the number “an Ivory Tower, unreasonable benchmark.” He said modeling projections did not call for it, nor could technology support it. While the number of daily tests has increased recently to nearly 250,000, health experts say it's still not nearly enough to safely lift stay-at-home measures."

"Top administration officials in recent days have started laying out specific timetables for when they believe the pandemic will be in the rearview mirror. The sunny declarations come as the White House pushes to revive the economy that has been central to President Trump’s reelection bid...Treasury Secretary Steven Mnuchin on Sunday predicted the economy would “really bounce back” in July, August and September."

"While the number of U.S. cases continues to rise, now at more than 1 million confirmed infections, many public health experts agree the country may be turning a corner and that the daily death toll is showing signs of leveling off. But Trump has been ridiculed for repeatedly downplaying the virus back in January and February, before it exploded across the country, underscoring the risks of declaring victory too soon. Public health experts routinely say that even though businesses and schools might reopen with safeguards and social distancing in place, Americans are unlikely to return to normal life until a vaccine is developed. That timeline is in the ballpark of 12 to 18 months."

"Kushner painted a rosy picture for "Fox and Friends" Wednesday morning, saying that "the federal government rose to the challenge and this is a great success story and I think that that's really what needs to be told." When he was pressed on coronavirus testing levels in the US, Kushner said the question shouldn't be why did it take so long, but, "How did we do this so quickly?" Kushner also predicted that things will be "rocking" by July."

"[President] Trump similarly attempted to reframe the narrative around the growing number of coronavirus cases and deaths, which have now surpassed the total of US troop fatalities during the Vietnam War. The President said Wednesday afternoon that other countries "don't have the ability to do what we're doing" on coronavirus testing and that while the 1 million coronavirus cases sounds bad, it is "an indication that our testing is so superior.""

How Long Will a Vaccine Really Take?

"Officials like Dr. Anthony S. Fauci, the top infectious disease expert on the Trump administration’s coronavirus task force, estimate a vaccine could arrive in at least 12 to 18 months....The grim truth behind this rosy forecast is that a vaccine probably won’t arrive any time soon. Clinical trials almost never succeed. We’ve never released a coronavirus vaccine for humans before. Our record for developing an entirely new vaccine is at least four years — more time than the public or the economy can tolerate social-distancing orders."

"...researchers might produce a viable vaccine in just 12 to 18 months, but that doesn’t mean you’re going to get it. Millions of people could be in line before you. And that’s only if the United States finds a vaccine first. If another country, like China, beats us to it, we could wait even longer while it doses its citizens first."

"President Donald Trump on Wednesday said that federal social distancing guidelines, which are set to expire on Thursday, will be "fading out" as states reopen their economies. "They'll be fading out because now the governors are doing it," Trump said at a meeting with the governor of Louisiana at the White House. The social distancing guidelines were put in place in mid-March before they were extended through April 30. The guidance suggests limiting gathering to 10 people, among other things."

"Several states have already made moves to reopen some businesses despite not meeting the minimum federal guidelines to start the process. A model often cited by the White House this week increased its projected COVID-19 death toll to 74,000 Americans by early August. Health officials report more than 1 million cases of the virus in the U.S. and nearly 60,000 deaths."