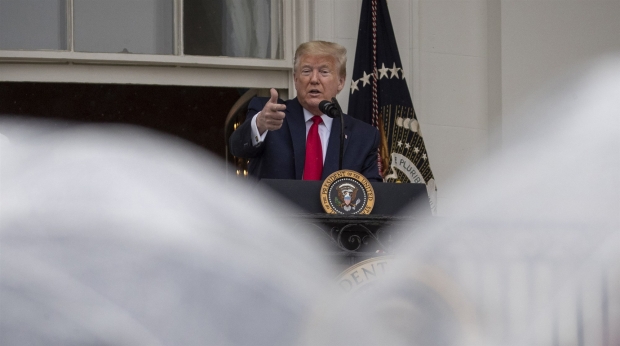 President Donald Trump and Twitter are feuding over the president's tweets and the social media platform's vetting of them. The president plans to sign an executive order Thursday aimed at reducing liability protections for social media companies.

Twitter marked Trump's recent tweets about mail-in voting as unsubstantiated, and attached several related fact check articles from major media outlets to the posts. This comes after other recent tweets from Trump about a conspiracy theory prompted some to call on Twitter to censor his posts.

Many reacting voices, regardless of bias, agreed that the president's Twitter use can often border on inappropriate. However, most right-rated voices criticized Twitter's purported attempts to gatekeep information, with some pointing out that while there isn't necessarily evidence voter fraud is widespread, there is evidence of it happening. Many left-rated voices, conversely, framed Trump's conduct as intolerable and damaging, and advocated for more speech regulation.

Other big news this week: The U.S. virus death toll is now over 100,000; Relaxed lockdowns and slow reopenings are placing more focus on safety risks; a George Floyd's death incited protests in Minneapolis and questions about police brutality and racial profiling; and Joe Biden apologized for being too "cavalier" after saying black voters "ain't black" if they consider voting for Trump over him.

On the Blog: Your opinion of Stacey Abrams as a vice presidential candidate may depend largely on where you get your news — coverage of her VP push couldn't be more divided.

"Donald Trump has threatened to “strongly regulate” or close down social media platforms that do not meet his standards for ideological balance, a day after Twitter, for the first time, slapped a warning label on a pair of Trump tweets spreading lies about mail-in voting. “Republicans feel that Social Media Platforms totally silence conservatives voices,” Trump tweeted on Wednesday morning. “We will strongly regulate, or close them down, before we can ever allow this to happen.”"

"Claims that Twitter polices content from the right more aggressively than content from the left have been the subject of US Senate hearings, but no conclusive data has been compiled, in part because most of the most blatant violations of the platform’s rules, racist and hate speech, are categorized as “conservative.”...In the past, Trump has praised Twitter for allowing him to take his message directly to followers, and despite his claims of being “silenced”, social media platforms have been a boon for Trump. His current campaign has rebuilt a targeted advertising operation on Facebook that was widely credited with helping Trump win in 2016."

Trump made Twitter his megaphone. A fact check won't change that.

"Just as Twitter has been opposed to booting Trump over possible violations of its terms of service, Trump may find it difficult or impossible to divorce himself from the platform that greased his path into politics. In the hours after the conflict erupted Tuesday between Trump and Twitter, some conservatives lamented that there was no way the president could win despite his pledge that he wouldn't allow Twitter to fact check him."

"Trump and fellow Republicans have options to exert leverage over Twitter. Sen. Marco Rubio, R-Fla., said on Twitter that if the service is going to "exercise an editorial role," it should lose the special protection that it and other internet companies enjoy from defamation suits. (The Communications Decency Act of 1996, often misunderstood, was written specifically so tech companies could exercise editorial judgment.) Trump tweeted Wednesday morning that "Republicans feel that Social Media Platforms totally silence conservatives voices," an indication that the president may be able to use Twitter's fact checking efforts to ramp up accusations of bias against tech companies."

Twitter has provoked outrage. But Trump is the bigger problem.

"What ought to be more head-spinning than all of this, however, is that the man in the Oval Office spends his days slinging out lies so copious that Twitter has multiple options for policing in the first place. Equally appalling was Mr. Trump’s reaction to Twitter’s timid fact-check: He threatened to “close them down,” having cried earlier this month that the “Radical Left is in total command & control” of social media sites. Twitter’s policies are messy, but that’s in part because the company is scrambling to serve a country whose most powerful public messenger is also its least responsible — all while maintaining the dedication to free expression that makes it a space for everybody."

"Twitter should develop a more coherent framework to deal with speech by world leaders; with real-world harm, including harassment; and with misinformation — and to articulate how they knit together in this case and in others. But it’s no wonder that its policies are a muddle. This president is a world leader who harasses and who lies, and everyone else is stuck trying to live with it."

""We have a different policy than, I think, Twitter on this," Zuckerberg told "The Daily Briefing" in an interview scheduled to air in full on Thursday. "I just believe strongly that Facebook shouldn't be the arbiter of truth of everything that people say online," he added. "Private companies probably shouldn't be, especially these platform companies, shouldn't be in the position of doing that.""

"On Tuesday, Twitter slapped a fact check notification on one of Trump's tweets for the first time, cautioning users that despite the president’s claims about mail-in voting, “fact checkers” say there is “no evidence” that mail-in voting would increase fraud risks and that “experts say mail-in ballots are very rarely linked to voter fraud. Facebook has faced criticism in the past for failing to address controversial content on the platform, but it appears Zuckerberg has no plans to change company policy. Chief Operating Officer Sheryl Sandberg expressed a similar sentiment during a 2017 CNBC interview, asserting that the tech giant does not intend "to be the publisher and we definitely don’t want to be the arbiter of the truth.""

"Those tweets by Mr. Trump were over the top in his usual style. But the critics and debunkers were already hammering away in response. Twitter didn’t need to put on a striped jersey to referee the political debate on its platform. Now that the precedent has been set, Democrats will no doubt demand that Twitter flag Mr. Trump’s every other missive. Fact check: Joe Biden got a good night’s rest and is decidedly not sleepy."

"All of this means that CEO Jack Dorsey is handing Mr. Trump evidence to prove his point that technology elites are out to get the President and his followers. Mr. Dorsey is teeing up Twitter (and maybe other social-media sites) for government monitoring and political control. “Twitter is completely stifling FREE SPEECH,” Mr. Trump wrote on Twitter (of course), “and I, as President, will not allow it to happen!” Watch and weep as public support leaps for government regulation of internet content, a Fairness Doctrine for social media."

"Once Twitter begins tagging some tweets and not others with “what you need to know,” it will be staking out partisan positions. The Trump tweets that precipitated its first election-related fact-check are a good example of this. It would have been far more reasonable for the social-media giant to label Trump’s ugly and libelous tweets about Joe Scarborough as misleading. Instead, Twitter decided to inaugurate its policy by alleging that Trump had dishonestly claimed that mail-in ballots would lead to “a Rigged Election.”"

"Whom will Twitter designate as its judge? Its fact-checking page redirects users to debunkings of the president’s tweets by partisan operatives such as Vox’s Aaron Rupar and CNN’s Daniel Dale — two figures who possess no expertise gauging policy outcomes and who are quite often dishonest and misleading themselves. As for CNN, the Washington Post, Vox, HuffPost, and the other outlets featured on the page — they deceive their audiences with far more sophistication than the president. These outlets like to appeal to the authority of experts, but not experts whose conclusions contradict their own. There is a reason we debate issues rather than appoint Truth Magistrates to hand down verdicts: For the most part, politics is a dispute not over facts but over values."

"The proposed order would direct executive branch agencies including the Federal Communications Commission and the Federal Trade Commission to study whether they can place new rules on the companies — though experts expressed doubts much could be done without an act of Congress. A similar executive order was previously considered by the administration but shelved over concerns it couldn’t pass legal muster and that it violated conservative principles on deregulation and free speech."

"Trump and his allies have long accused the tech giants in liberal-leaning Silicon Valley of targeting conservatives on social media by fact-checking them or removing their posts. Last year the White House unveiled a “Tech Bias Reporting tool” meant primarily to highlight cases in which conservatives believed they were being silenced. The president’s critics, meanwhile, have scolded the platforms for allowing him to put forth false or misleading information that could confuse voters."

Twitter and Trump on a collision course with the truth

"Twitter argues that removing tweets “would hide important information people should be able to see and debate.” Yes, we know how difficult it is for the president to be heard. If Twitter applied its rules to all, controversial things would still be said and debated by the American people, on Twitter and off. Twitter just wouldn’t be an accomplice to falsehoods and harassment. It sometimes seems like Twitter didn’t go into this business with eyes wide open. Did it occur to them that those cute little bird chirps would become bludgeons in the hands of the powerful?"

"In his latest tweet, Trump threatens Twitter and other social media companies with regulation. There’s an irony here. A private business is exercising its own free speech by adding a note to tweets, pointing users to a page with more information about the integrity of elections. In response, a government official is using his power to try to intimidate a private company into not speaking. There’s your First Amendment violation. We live in a nation blessed with free speech, but there are laws against using that speech to harass, coerce or cheat others. Setting those standards on Twitter and applying them equally to all, regardless of position, power or influence, would be a very American thing to do."

Banning Trump from Twitter would be a disservice to the public

"The power and influence wielded by elected officials entitles the public to as much transparency as possible into the thought processes of their representatives in government. That includes Donald Trump's deranged tweets spreading despicable fake conspiracy theories about a woman's tragic death nearly two decades ago...Trump is demonstrating his unfitness for office, and Twitter is the platform where he's making conservatives and stout allies cringe, because his actions are indefensible. If one agrees that Trump is unfit and wants the world to see him at his worst, taking away his microphone is the least advisable course of action."

"Elected officials' social media accounts offer a window into their thinking. And say what you want about Twitter, it shows us where Trump's head is at. That's a good thing. Would the public rather not know that he's taking some of his policy cues from Charlie Kirk and Candace Owens? Is it in the public interest to hide his ignorance and gullibility? More information is always better than less with public officials, especially when they're metaphorically showing their rear ends."