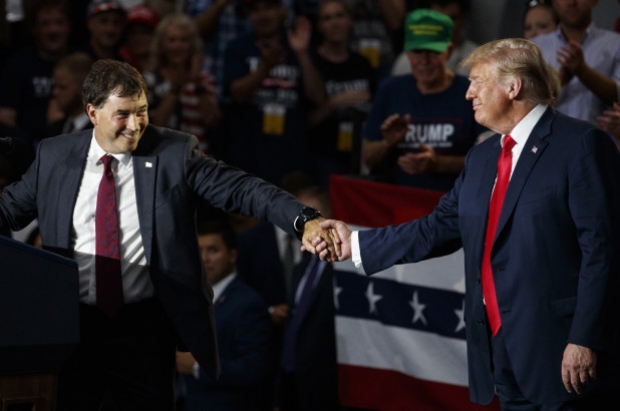 Wisconsin, Minnesota, Connecticut, and Vermont voters on Tuesday selected nominees for the midterms, cementing the final choices for the upcoming November elections. While outlets across the aisle highlighted a string of Republican victories for candidates endorsed by President Trump, many on the Left also placed particular emphasis on historic wins in the Democratic party, including the first transgender nominee for statewide office.
Check out some other big stories this week: Trump Pulls Security Clearance of Ex-CIA Director John Brennan, Pennsylvania Grand Jury Report Says 1,000 Children Were Sexually Abused by Catholic Priests, and Ben Carson to Revise Obama-Era Fair Housing Rule.
Snippets from the Right
‘5 for 5’: Trump touts victories of GOP candidates he endorsed
New York Post
"Republicans breathed a sigh of relief and Democrats conveyed hope for a blue wave in the fall midterm elections after GOP House candidate Troy Balderson eked out a razor-thin victory over Democrat Danny O’Connor in a much-watched special election in Ohio.
...
Balderson, who was endorsed by Trump and Ohio Gov. John Kasich, claimed victory even though just 1,754 votes separate him from O’Connor, with nearly 9,000 additional ballots still to be counted in the next 10 days from provisional voters and absentee ballots from military members serving overseas.
...
Trump was also quick to take credit for helping to get Balderson over the finish line, even though the results were still up in the air. '
When I decided to go to Ohio for Troy Balderson, he was down in early voting 64 to 36. That was not good,' the president tweeted late Tuesday. 'After my speech on Saturday night, there was a big turn for the better. Now Troy wins a great victory during a very tough time of the year for voting. He will win BIG in Nov.'"
Snippets from the Left
Groundbreaking Night for Women and Diversity, While a Trump Critic Falls
The New York Times
"Former Gov. Tim Pawlenty of Minnesota was soundly defeated Tuesday in his bid to reclaim the Republican nomination for governor, a remarkable upset that demonstrated President Trump’s tightening grip on his party and the difficulty those who have criticized him in the past are facing with today’s primary voters.
...
On a night when voters in four states went to the polls, Democrats delivered groundbreaking primary victories for a transgender woman in Vermont, a Muslim woman in Minnesota and an African-American woman in Connecticut, while voters in Wisconsin nominated a top state education official, Tony Evers, to challenge Gov. Scott Walker, one of the most vulnerable high-profile Republicans of the midterms cycle.
...
The races in Wisconsin and Minnesota were an important gauge of Mr. Trump’s political gravitational pull among Republicans in Midwestern swing states, where doubts about the durability of his popularity with conservatives have lingered. And after Tuesday’s results there can be little doubt what an asset the president has been for Republicans competing against other Republicans in primaries.
Whether he helps in a tight general election in states that are on a knife’s edge politically is far from clear."
Snippets from the Center
Midwest battleground states tap candidates for midterm elections
Reuters
"Wisconsin Republicans tapped state senator Leah Vukmir to battle incumbent Democratic U.S. Senator Tammy Baldwin, according to an Associated Press projection, after a bruising primary that could hamper her chances in November.
That state helped drive Republican Donald Trump’s surprising presidential win two years ago and turnout there and in neighboring Minnesota could serve as a barometer of Democratic strength headed into the midterm elections.
...
In Vermont, unofficial results showed Christine Hallquist as the first openly transgender person to win a major U.S. party nomination for statewide office in the Democratic governor’s primary.
Senator Bernie Sanders, the former presidential candidate, easily won that state’s Democratic Senate primary. But Sanders, as before, is expected to decline the nomination and run as an independent."
Discover more on this topic on AllSides.
Elections, Midterms, Story Of The Week, News