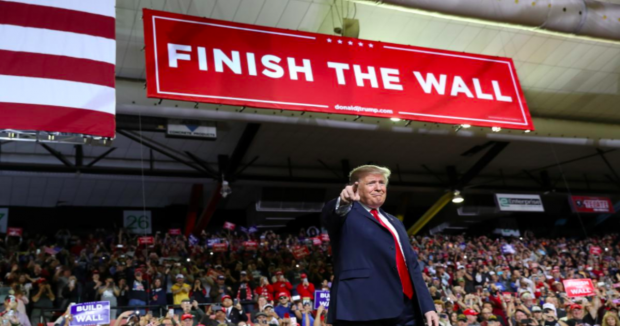 President Trump agreed to sign a spending bill to avoid another government shutdown but will declare a national emergency to fund the construction of a wall at the southern border.
Many Democrats have condemned the move as autocratic and criticized his immigration policy as ineffective. Republicans remain split on the issue, with some saying they support the decision. Others criticized using a national emergency to bring the border wall to fruition, saying it could set a dangerous precedent.
From the Blog: Should you hate AllSides? In our hyperpolarized society, people often disparage or boycott brands that work with, are run by, or receive funding from people, groups or institutions whose politics they disagree with. Well, if that describes you, you should probably boycott AllSides.
Check out some other big stories this week: National Debt Tops $22 Trillion for First Time, William Barr Confirmed as Attorney General, and Rep. Ilhan Omar Apologizes for Tweet Denounced as Anti-Semitic.
Snippets from the Center
Trump vows emergency declaration over wall, agrees to shutdown-averting bill
Reuters
"President Donald Trump vowed on Thursday to declare a national emergency in an attempt to fund his U.S.-Mexico border wall without congressional approval, a step likely to plunge him into a court battle with Congress over constitutional powers."
Trump to sign border deal, declare national emergency
The Hill
"The Washington Post reported earlier this month that McConnell privately cautioned Trump not to use national emergency power to fund the wall because it would face opposition from Republicans.
...
But the GOP leader changed course on Tuesday when he encouraged Trump to sign an omnibus spending package made up of seven spending bills that provided only a fraction of the $5.7 billion Trump had demanded for the border wall."
Trump's emergency declaration would trigger a drawn out legal fight
USA TODAY
"The potential for an extended legal battle may explain why Trump backed away from the emergency scenario last month. The president, who faced criticism from some Republicans for the idea, said he wouldn't declare an emergency imminently. Republicans noted a future Democratic president could also use an emergency to work around Congress."
Snippets from the Right
Trump declaring a national emergency to build border wall with McConnell's support will come back to haunt conservatives
Washington Examiner
"Those who seek to limit the size and scope of government should want it to be more difficult for the executive to arbitrarily use power. That Trump is taking this action means that a Republican president will have been on board with using emergency powers to undertake a massive infrastructure project without the consent of Congress. What's more, the Republican leader in the Senate, along with no doubt plenty of other Republicans, will have signed on this action, along with, no doubt, plenty of conservative Trump cheerleaders."
Pelosi Warns That a Future Democratic President Could Declare National Emergency to Push Gun Control
The Daily Caller
"House Speaker Nancy Pelosi warned President Donald Trump on Thursday that a future Democratic president could declare a national emergency to achieve an agenda, such as gun control policy."
Not All Conservatives Are Happy About Trump's National Emergency Declaration
Townhall
"The question isn't if Democrats will now utilize this strategy and point to Trump's precedent it's a matter of when and for what issues."
Snippets from the Left
A Trump-Made Emergency
The New York Times Editorial Board
"This administration is forever coming up with creative new ways to disturb and dismay the nation. Mr. Trump’s eagerness to undermine the Constitution to serve his short-term political gain remains among the most outrageous."
'Dangerous.' 'Abuse.' 'Lawless': Bipartisan attack on Trump national emergency declaration
NBC News
"The potential emergency declaration, which Trump could try to use to obtain existing government funds from agencies and departments to build the wall without congressional approval, set off a chorus of criticism from Democrats and Republicans."
We have a national emergency, all right. Its name is Donald Trump.
Washington Post Opinion
"Let’s be clear: There is no emergency. Arrests for illegally crossing the U.S.-Mexico border peaked in 2000, nearly two decades ago, at more than 1.5 million a year. They declined sharply under Presidents George W. Bush and Barack Obama and, in 2017, were at their lowest point since 1971. In 2018, apprehensions ticked up slightly — but still barely climbed above 400,000."
Discover more on this topic on AllSides.
Immigration, Donald Trump, Border Wall, Government Shutdown, Story Of The Week, News