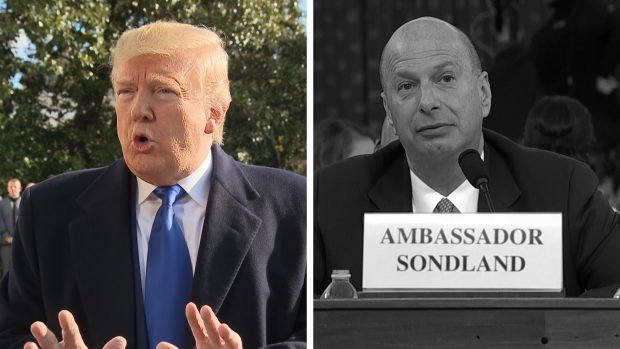 Gordon Sondland, the U.S. Ambassador to the Eurpoean Union, testified publicly Wednesday in the impeachment inquiry into President Donald Trump.

Sondland's statements gave new insight on the alleged "quid pro quo" between Trump and Ukraine; he gave credence to the allegations, saying "everyone was in the loop," but also denied that Trump ever brought up foreign aid as part of his effort to prompt Ukrainian investigations of the Bidens.

Voices on the left painted the testimony as some of the most damning information to come out of the impeachment inquiry; right-leaning coverage tended to report the opposite, framing Sondland's assertions as more "hearsay."

Check out some other big stories this week: Two Jail Guards Indicted in Connection with Jeffrey Epstein's Death; Buttigieg Surges in Iowa, Fizzles in Other States; and Democrats React to Obama's Call for Moderation in Primary Race.

Sondland: 'Was there a quid pro quo? The answer is yes'

"“I know that members of this Committee have frequently framed these complicated issues in the form of a simple question: Was there a ‘quid pro quo?’” Sondland said in his opening remarks. “As I testified previously, with regard to the requested White House call and White House meeting, the answer is yes.""

"Sondland, who Democrats accuse of withholding information from lawmakers in his closed-door deposition, pinned the effort to extract the conditions from Ukraine on Trump’s personal lawyer, Rudy Giuliani."

Trump says 'it's all over' for impeachment inquiry after Sondland testimony

"Speaking to reporters before departing on a scheduled trip to Texas, Trump claimed that Sondland’s testimony means “it’s all over” for the proceedings and that the House inquiry into Trump should come to a halt."

"While Trump argued that Sondland’s statement proves there was no quid pro quo between his administration and Ukraine -- the matter at the heart of the impeachment probe -- Sondland gave a more nuanced account. He confirmed he never heard directly from Trump on a quid pro quo linking military aid for Ukraine to politically advantageous investigations."

"At the prompting of Democrats, the ambassador gave hours of testimony on some scheme he imagined was happening. But that testimony was mostly made up of secondhand or speculative claims. He testified that he “presumed” and “came to believe” that the administration was engaged in quid pro quo for certain investigations — providing no proof or new evidence. He also said his theories about why aid was withheld were a “guess.”"

"The testimony was far from conclusive. Congress has called many “star” witnesses, yet they are no closer to proving an impeachable act than they were two months or two years ago. This entire process has been a politically motivated distraction, and Wednesday was no different. The left is attempting to overturn the results of 2016 based on presumption, speculation, and second- and thirdhand information."

"Only within the past few months, when evidence emerged including the White House record of Trump's phone call on July 25 with Zelenskiy, did Sondland tie the phrase often used, "Burisma," which is a reference to the Ukrainian company that paid Hunter Biden, to Trump and the election."

"Sondland already has revised the deposition he gave behind closed doors in an earlier phase of this inquiry, and questioners on Wednesday pressed him about what he called gaps in his recollection or whether he was stating a fact or making an inference."

"Sondland, an Oregon hotelier who gave $1 million to Trump’s inaugural fund after his 2016 election, also pointed to Vice President Mike Pence, Secretary of State Michael Pompeo, Energy Secretary Rick Perry and several other administration officials who, he said, were aware of the efforts."

"Sondland, though, said he never learned why nearly $400 million in aid to Ukraine was held up. He said he “came to believe” that it was also tied to Trump’s desire for the investigations because, using an analogy, “two plus two is four.”"

"Mr. Sondland testified there was a “quid pro quo” between a White House meeting for the new Ukrainian president and the investigations Mr. Trump sought, and explained in detail why he believed nearly $400 million in aid to Ukraine had been linked to those probes. Democrats said his account backed up the central issue in the impeachment inquiry. Republicans questioned his memory and truthfulness and said he was overstating the evidence for his conclusion."

"Republicans offered the harsher rebuke of the ambassador, citing his lack of note-taking as a sign that his recollections weren’t reliable."

"Gordon D. Sondland, the diplomat at the center of the House impeachment inquiry, kept Secretary of State Mike Pompeo apprised of key developments in the campaign to pressure Ukraine’s leader into public commitments that would satisfy President Trump, two people briefed on the matter said."

"In August, Mr. Sondland and the special envoy to Ukraine, Kurt D. Volker, were in negotiations with a top Ukrainian official, Andriy Yermak, about a public statement making a commitment to investigating Mr. Biden and the energy company Burisma, which had placed Mr. Biden’s son Hunter Biden on its board."

"Administration officials immediately sought to emphasize that Sondland was relying in part on his own presumptions based on conversations with Trump’s personal lawyer Rudolph W. Giuliani — an argument echoed by GOP lawmakers later Wednesday — and that Trump himself never personally told Sondland about preconditioning $400 million in military aid to Ukraine or a coveted White House visit on the probes."

"Indeed, Wednesday’s testimony appeared to have little immediate effect on the perspective of Senate Republicans, who will be responsible for deciding Trump’s fate if he is impeached by the House."

"Both Pence and Pompeo strongly denied Sondland's account, issuing statements saying he never raised his concerns with them."