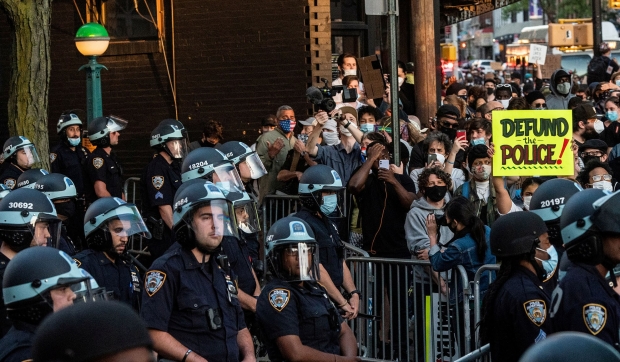 Calls to defund the police have rung out nationwide after George Floyd's death at the hands of law enforcement last month.

Prominent Democrats recently introduced a bill aimed at significant police reform. Many Republicans, led by President Donald Trump, are standing by law enforcement, while some liberal politicians are also hesitant to back calls for defunding: Democratic presidential frontrunner Joe Biden said he doesn't support the slogan.

Many voices on all sides of the spectrum are calling for some sort of police reform, such as ending qualified immunity, or redistribution of funding. Some left-rated voices are calling to abolish police forces altogether; some right-rated voices counter that such a move would harm minority communities the most.

Other big news this week: The virus is under close watch as reopenings continue from state to state; May's job numbers were much better than experts predicted; controversy gripped the New York Times after an op-ed from Republican Sen. Tom Cotton spurred backlash; and debates emerged on the place of monuments and other memorials for Confederate generals in present-day society.

On the Blog: The BBC's characterization of London protests as "largely peaceful" attracted social media criticism and claims of media bias.

"Police departments are supposed to protect and serve their communities, and they do so in a variety of ways. They field emergency calls, respond to urgent situations, and imprison those who violate the laws. But on a more fundamental level, our law enforcement agencies exist to protect our lives and liberties from, well, each other."

"This isn’t to say the system is above reform — quite the opposite. Cops are human beings too, which means they also need to be kept in check. The past few weeks have made it quite clear that we need more accountability and transparency within law enforcement. And many police departments across the country have proved that there is a deep-rooted institutional and cultural failure that needs to be addressed. But the way to address these failures is through more training and more accountability, which means more funding and more oversight."

"Data posted by the website Open Secrets reveals that four of the top five recipients of police-related funding in the House are Democrats. Those numbers are reflected in the Senate, as well. Open Secrets compiled the information by reviewing donations since 1994 from police unions and law enforcement PACs to current members of the House and Senate."

The Media Urge to Explain away ‘Defund the Police’

"In part, of course, all this explaining is a reflection of what a radical and politically explosive idea “defund the police” is in an election year, and how it divides the Democrats along ideological and generational lines. Leading Democratic politicians are running headlong away from the slogan while trying to embrace the people chanting it. Joe Biden, who for years proudly touted his role in the 1994 “put 100,000 more cops on the street” crime bill, visibly wants no part of the slogan. But unlike the party’s leadership, many of whom were born in the early 1940s, influential younger lawmakers such as Alexandria Ocasio-Cortez are pushing the idea. These are the folks who may run the party when the age-77-and-up crowd moves on."

"If passed, the nonbinding resolution, spearheaded by Sen. Tom Cotton (R-Ark.), would put the Senate on record opposing efforts to defund the police while also calling for "justice" for George Floyd, an unarmed black man killed in police custody last month."

"The resolution notes that "understaffed police departments and undertrained police officers increase the risk of encounters that result in the use of force, including unjustifiable or excessive force." It also states that "defunding the police would leave police departments understaffed and undertrained, while also increasing the risk of violent crime to the communities of the United States.""

'Defund the police' calls grow amid protests. Reallocations could fund minority entrepreneurship instead

"Small business ownership creates wealth. It fosters pride. It enhances and stabilizes communities. It creates a tax base, and that in turn helps fund better schools. The ripples that result from small business ownership positively affect the entire community. Small business ripples create jobs. There are ripples of hope and pride as once-blighted neighborhoods are revitalized. Money flows. Opportunity grows. So yes, one answer is money, specifically, increased funding for grants and loans to minority small-business owners. It is much needed."

"If you come from poverty, if your neighborhood was redlined, if your school was underfunded if you have had few entrepreneurial role models, how do you go from worker to entrepreneur? It takes a community effort of mentors, funding, education, and inspiration. Some great organizations are already doing this. But it also takes money, and where does the money come from? Right, a smaller, smarter police budget, with funds retargeted to entrepreneurship education."

"The growing calls to dismantle or reimagine U.S. police departments have put pressure on Biden and other Democratic leaders, who favor policing reforms but are wary of adopting a loaded phrase that some Democrats fear could be a divisive election issue. President Donald Trump and other Republicans have seized on the “defund the police” slogan to suggest Democrats are bending to extremists at the expense of public safety."

"“I don’t support defunding the police,” Biden said afterwards in an interview with CBS. “I support conditioning federal aid to police, based on whether or not they meet certain basic standards of decency and honorableness.” Biden had previously called for a $300 million investment in policing, contingent on officers mirroring the diversity of their communities. In a statement, his campaign said he supports funding for better training, body cameras and community policing."

'All the world is watching': After nationwide protests, 4 ex-officers face new charges in George Floyd's death

Justin Brooks for The Appeal (opinion)

"Convictions of officers involved in police shootings are rare. According to Philip Stinson, a Bowling Green State University professor of criminal justice, between 2005 and 2017, 82 officers were charged with murder and manslaughter for on-duty shootings. Only 35 percent of those officers were convicted. Comparatively, in cases involving people charged with a felony, the general public is convicted 66 percent of the time and incarcerated 50 percent of the time, according to the Bureau of Justice Statistics."

"In a 2018 study, researchers at New York University found that “in a city of 100,000 people, each new non-profit community organization [led] to a 1.2 percent drop in the homicide rate, a 1 percent decrease in violent crime rate, and a 0.7 percent reduction in property crime rate.” Expanding social and economic programs for under-resourced communities leads to an overall decrease in crime."

"The backlash from the right comes even as many conservatives begin to accept the premise that African Americans are disproportionately targeted by police. A recent Washington Post-Schar School poll found that 53 percent of Republicans backed the protests, and 47 percent believed police killings of black men indicate broader problems, compared with 19 percent in 2014."

"The worldwide protests over George Floyd’s death could, in theory, end up with meaningful police reform, given the growing bipartisan consensus that something must be done. But confusion about the left’s slogans promises to allow Trump’s base to define the term the way they want."

What 'Defund the Police' Really Means, and How It Could Be Effective

"...we’ve been here before. Ferguson was just five years ago, and similar national episodes have placed racist policing under periodic spotlights for the past century. And reform efforts don’t necessarily move the needle. After all, New York’s police department banned chokeholds more than twenty years ago, which did nothing at all to save Eric Garner’s life."

"Opponents to such a profound restructuring of policing cite concerns about how serious offenses like rapes and murder would otherwise be prevented or investigated. But arrests for violent crimes like these make up no more than five percent of arrests nationally. The vast majority of police arrests are for crimes ranging from drug offenses to failure to pay traffic fines—and supporters of the defund movement argue that communities would be better off if these issues were tackled by other kinds of civil servants, like counselors and social workers."