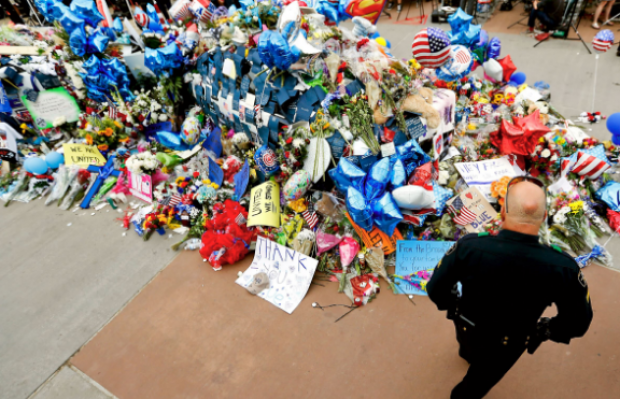 While headlines today are heating up with news of the GOP VP pick and next week’s convention, the biggest story over the last week has been the three different violent incidents that rocked the nation with shock, outrage, grief, and protests. These are times when media coverage and opinions can seem more polarized than ever, as you’ll see in the Right and Left snippets below. But, it’s also a time when uncommon alliances happen in an effort to heal and prevent further violence, as shown in today’s Center snippet and in the image of George W. Bush and the Obamas at the Dallas memorial.
Interested in holding a group discussion on this topic with friends or in a classroom? Follow this guide at Living Room Conversations to discuss with friends, and friends of friends, this deeply emotional issue.
See other news featured by AllSides such as Mike Pence is Trump’s Choice, GOP Convention Speakers, Trump vs. Ginsburg and the latest AllSides News.
Snippets from the Left
Sorry conservatives, new research from Harvard shows a profound amount of racism by police…not less of it
Salon
"Freyer’s research on police use of lethal force is not a definitive rebuttal or wholesale rejection of the racial disparities that exist in how America’s cops treat black people as compared to whites. For example, it does not disprove that the recent video recorded killings of Alton Sterling and Philando Castile were driven by anti-black racism. Freyer’s conclusions, like other research of this type, speak to macro-level societal phenomenon and not every individual case.
While many conservatives are crowing about Freyer’s finding that police may not, in fact, be more likely to use lethal force against black people, they are conveniently refusing to acknowledge how his work provides further evidence of anti-black bias (and casual, day-to-day brutality) by the country’s cops."
Snippets from the Right
Ignorance of Facts Fuels the Anti-Cop 'Movement'
Town Hall
"But of the nearly 1,000 people killed by cops last year -- according The Washington Post's own tally -- the Post reported that less than 4 percent were instances of white cops shooting and killing an unarmed black man.
And there's this. What's hard about complying with a cop's order so you don't get shot? There is no right to defy a lawful order. That a cop may be rude does not make an order any less lawful. Hillary Clinton, showing how she feels blacks' pain, says black parents tell her that they have what is called "the talk" with their children on how to comport themselves when engaged in an encounter with the police. But in almost every recent case of an officer shooting a black person, the black person resisted arrest. So much for "the talk."
How about, "Comply -- you won't die"?"
Snippets from the Center
Bipartisan group formed in House to address wave of violence
CNN
"After a string of deadly shootings in Minnesota, Louisiana and Texas began a national dialogue about how to address violence in communities across the country, House members Wednesday unveiled a bipartisan working group to explore how to respond.
"There are great success stories and solutions that are out there already. We need to bring them to Congress, to Washington, to other communities, to learn from this and to replicate is to that we can find solutions," House Speaker Paul Ryan said at a CNN town hall Tuesday night.
"Let's start talking about solutions, and I think we just need to calm down and start our healing process," he said.House Judiciary Chairman Bob Goodlatte and the committee's top Democrat, Michigan Rep. John Conyers, released a joint statement Wednesday indicating they would lead the effort…
"It's clear that more must be done to end excessive use of force, strengthen police accountability, prevent violent attacks on law enforcement and improve the relationship between police officers and the communities they are sworn to protect and serve," Goodlatte and Conyers said."
Discover more on this topic on AllSides.
Story of the Week, News, Violence in America, Police